Dog who saved the World Cup for England 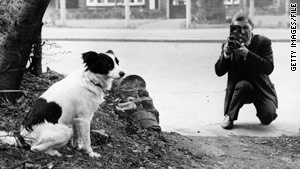 Pickles poses for photographs after sniffing out the stolen trophy.

(Mental Floss) -- Although Portuguese striker Eusebio scored nine goals in the 1966 World Cup and England's Geoff Hurst booted four goals to lead the home team to victory, neither of them was the real most valuable player of that year's Cup.

That distinction went to an English pooch named Pickles.

As part of the ramp-up to hosting the 1966 World Cup, English soccer officials had been displaying the Jules Rimet Trophy that went to the Cup's winner in various places around the country.

That March, the trophy had been residing in Methodist Central Hall in the Westminster area of London under the watchful eyes of five guards.

Something went awry on the morning of March 20, though. The guard who normally stayed at the trophy's side had the day off, and at some point when the other four members of the security detail were enjoying their coffee or a quick trip to the bathroom, thieves broke in a back door of the hall and swiped the trophy.

As you might imagine, this theft didn't reflect too well on England. Hosting the World Cup is a complex, logistically difficult operation, and while everything may not go totally smoothly, FIFA at least expects host countries not to lose the trophy itself.

Eventually, the police received a ransom demand: the thief would return the trophy in exchange for £15,000 in small bills. Scotland Yard and soccer officials reluctantly went along with this plan, but a trailing police van spooked the thief before he led them to trophy.

After police apprehended the suspect, a petty grifter named Edward Betchley, he claimed he was only a middleman who was working for a shady, possibly fictitious character known as "The Pole."

The police had their man, but they were still short one Jules Rimet Trophy. That's where Pickles, a four-year-old mutt, entered the picture.

On March 27, Pickles was out for a walk with his owner, David Corbett, in South London when something under a hedge distracted the pup. Pickles insisted on investigating this hedge and eventually pulled out a newsprint parcel tied together with string. When Corbett opened the parcel, he realized that Pickles had found the Jules Rimet Trophy. It's still not clear how the trophy ended up under the hedge in the first place.

Corbett ran the trophy to his local police station, but the cops thought the story of Pickles miraculously finding the trophy in a hedge was a bit far-fetched. They initially thought Corbett was a suspect for the theft; detectives even questioned him until 2:30 a.m. and made him stand in a lineup before clearing his alibi for the day of the burglary.

Once Corbett was cleared, the media got the story, and Pickles became an international star. Offers to visit foreign countries rolled in for the heroic hound, and he received a free year's supply of dog food. Pickles even starred in a feature film, "The Spy With the Cold Nose." At the height of Pickles' popularity, he was earning £60 a day for Corbett.

Mental Floss: Why do hockey fans throw things on the ice?

Better still, when the English team won the World Cup that year, the players asked for Pickles to attend the celebratory banquet and even let him lick their plates clean. Corbett received a £3,000 reward that he used to buy a house in Surrey.

Sadly, Pickles didn't live to see the next World Cup. And the Jules Rimet Trophy wasn't much luckier.

When Brazil won the Cup for the third time in 1970, it earned the right to keep the trophy in perpetuity; the familiar FIFA World Cup trophy someone will win next month made its debut in 1974.

Thieves stole the Jules Rimet Trophy from a locked case in Brazil in December 1983. Tell your pups to keep their eyes open; the purloined trophy still hasn't been recovered.