Gay teens at center of controversies find support in each other 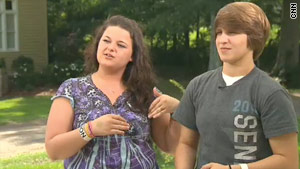 (CNN) -- For gay teens Constance McMillen and Ceara Sturgis, high school has ended, but acceptance of their sexuality in each of their Mississippi towns is just beginning, they say.

McMillen made headlines in the spring when she asked to attend her prom wearing a tuxedo and escorting a girl. Her school district in Itawamba County canceled the prom entirely. (On Tuesday, McMillen is in the spotlight again as she travels to the White House to meet President Obama at a ceremony recognizing the contributions of LGBT Americans.)

The superintendent of the Itawamba County school district told CNN that she couldn't comment on the case while the case is pending.

Around 250 miles away in Wesson, Sturgis wore a tuxedo, instead of the traditional drape or dress, for her senior portrait. She believes that she was penalized by being omitted from the senior section in her yearbook.

Neither the principal nor the school's superintendent would talk with CNN. After repeated calls, the district office administrator told CNN, "We're done." In October, the principal told a Jackson TV station he wasn't able to comment "on that particular situation."

"Everything happens for a reason," Sturgis said in an interview with CNN's Soledad O'Brien. "This is the start of something new. I think that this can be the change for gay youth. One day it's going to be different. And somebody has to start it, and why not us?"

The two women have become a support system for each other, connected, in part, by the Mississippi Safe School Coalition. The group is made up of mostly college and high school students who are working to make schools in Mississippi safer for, and more accepting of, gay youth.

McMillen reached out to Sturgis after viewing a Facebook site the MSSC set up to promote Sturgis' cause.

In 2004, the national gay rights group GLSEN -- Gay Lesbian Straight Education Network -- issued a report that said of all 50 states, Mississippi had the most hostile environment for gay youth.

"Even starting a GSA (Gay Straight Alliance club) at your school or taking a same sex date to prom is a revolutionary act," explains Izzy Pellegrine, a gay youth activist and 19-year-old sophomore at Mississippi State. "Just being out in your high school... you can be the only LGBT person that anyone in your high school has ever met."

Pellegrine is a board member of the group that has hosted training sessions in how to start gay-straight alliance clubs, lobbied for anti-bullying bills and started a "prom-watch" to identify schools where they think kids might be discriminated against.

McMillen transferred schools and completed the final weeks of her senior year in Jackson, Mississippi. She says the stress was just too overwhelming. "At one point I was walking through the lunchroom and there were people booing. I've gotten a lot of hateful text messages."

In March, a federal judge ruled McMillen's first amendment rights were violated when her school district refused to let her attend her prom in a tux with a girl and canceled the prom. The judge didn't order the school to host the prom because parents had already planned a parent-sponsored prom.

McMillen believes the alternative prom she was sent to was a sham because only a handful of people attended. "A lot of people were talking about how it was a joke just set up for me," she says.

The ACLU has filed a complaint in response and another court hearing is pending. The school district denies it directed McMillen to a fake prom.

McMillen says despite the difficult times, she wants to return to Itawamba and begin studies at the local junior college. She wants to be near her high school girlfriend. She says it won't be easy. "My best friend -- we had been friends for like seven years -- has not spoken with me since the day they canceled prom," she says.

Sturgis says her classmates are more accepting than McMillen's classmates, but that didn't lessen the sting. "Let's say we put [my tuxedo picture] in the yearbook. Would anybody hurt like I hurt since I'm not in the yearbook?" she says tearfully. "It wouldn't hurt anyone."

She says she's considering suing, but knows that won't get her picture in Wesson's 2010 yearbook.

"Hopefully it will help somebody else in my same situation," she says. "And that's what I'm really aiming for. I don't want anyone else to go through what I'm going through. This was a lot to handle in one year. I think people should be able to wear what they want to wear for their senior picture. It's not hurting anyone else and this yearbook is for them. It's not for the teachers."