By Eileen Kelly, The Frisky 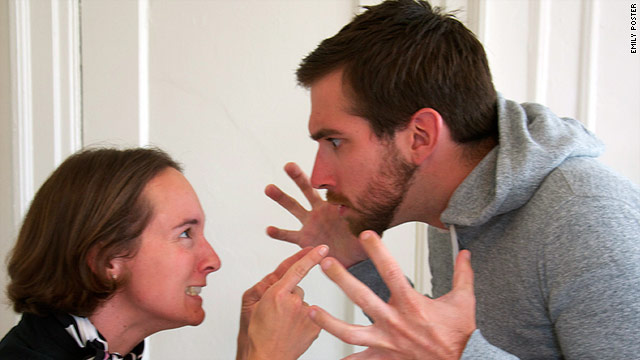 "There were a lot of things to talk about. A lot of reasons to be resentful and angry," the author says.
STORY HIGHLIGHTS
RELATED TOPICS

(The Frisky) -- There are topics people won't touch at cocktail parties because it's not "polite conversation." These are subjects people secretly want to discuss, but, when broached over hummus and Merlot, make them uncomfortable. These are precisely the things I love talking about.

So here goes: My husband and I just graduated from couples therapy.

We had just gotten back from a vacation with friends in the Bahamas with our then-3-year-old twins. There's something about couples in trouble and the Caribbean, an unspoken belief that perhaps the turquoise water will bring clarity. That the sun and sand will somehow breathe new life into a choking, gasping union. I know several couples who returned from a Caribbean vacation and immediately divorced.

I remember sitting on the beach alone one night after a particularly bad fight, thinking, "The Caribbean is a relationship graveyard. It's where bad marriages go to die."

When we returned home I told my husband I was either calling a therapist or a lawyer. It was his choice.

Not knowing whom to go to for a recommendation, I clicked onto PsychologyToday.com and looked up therapists in our area. I decided a man would be best because I didn't want my husband to feel ganged up on. There was only one guy who had a picture. He had a really warm, sort of goofy smile that made me instantly like him. I went with my gut and made an appointment.

Is my writing about this making you uncomfortable? OK, take how awkward you feel reading this article about marriage counseling and multiply that feeling by a thousand: that's how it feels to actually go for the first time. And the second. And the twenty-second, come to think of it.

The Frisky: 8 celeb guys who got revenge bodies

I'm not a wealthy, Jewish woman from the Upper East Side. I'm an Irish-Catholic from New Jersey. We don't talk about our problems. We cloak ourselves in them until they harden to a shiny, impervious shell. Remember that scene between Matt Damon's character and his girlfriend in "The Departed"? "If we're not gonna make it, it's gotta be you who gets out, 'cause I'm not capable. I'm [expletive] Irish. I'll deal with something being wrong for the rest of my life."

We enter the therapist's office, ring a little doorbell mounted to the wall in the waiting area and take a seat. I pick up "Real Simple" and pretend to read it. My husband pretends to read "Time."

A few minutes later the couple in the time slot before us comes out. We all smile sheepishly, trying to pretend we don't see each other's guts all over the floor. Then my husband and I go in and sit down. I stare at the therapist. He stares at the therapist. We examine our shoes, make small talk. I'm not going to lie. It's uncomfortable. I think of what Sigmund Freud said about the Irish: "This is one race of people for whom psychoanalysis is of no use whatsoever."

The Frisky: What NOT to put in online profile

Add to this symphony of awkwardness that my husband travels a lot, leaving me to often go to couples therapy ... alone. Now there's a situation that can make you feel kind of crazy.

Therapist: "How are you guys doing?"

Me: (motioning to the empty chair) "I feel like we're getting closer. I think this is really helping."

There were a lot of things to talk about. A lot of reasons to be resentful and angry. A lot of wounds that had never healed over the years because they were never cared for, apologized for. Like the time he had the nerve to ... (deep breath). OK, I'm still working through some stuff.

The main thing, though, was that we weren't seeing each other. You can be sitting right next to someone on the sofa, sleeping next to him every night, but when that someone -- the person you're supposed to mean more to than anyone else -- doesn't see you, you can be the loneliest person in the world.

It looked really bleak for us for a very long time. But this past fall we turned a corner, and we haven't looked back.

I was at a cocktail party last weekend. Someone said, "Hi, how are you? What's new?"

And I answered, "Well, if you want to know the truth, I was on the brink of divorce. My husband and I went to therapy and did a lot of work, and now we're happy again."

The Frisky: He told me to lose weight on our first date

Part of me wishes I had answered truthfully. Because when we talk about these things, sometimes there's that moment of recognition in another person's eyes that tells us we just made that person feel a little less alone.