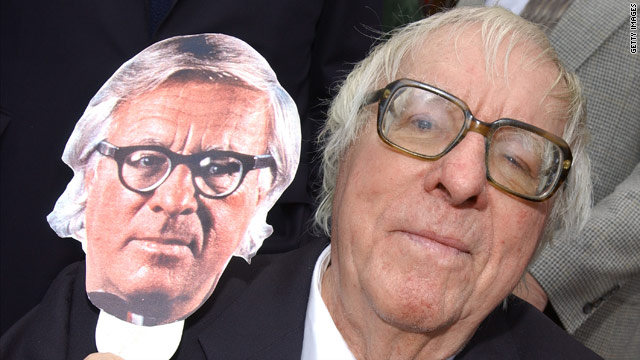 Ray Bradbury turns 90 this month, but his house, which is filled with stuffed animals and toys, looks like a playhouse.
STORY HIGHLIGHTS

The 89-year-old science fiction author watches Fox News Channel by day, Turner Classic Movies by night. He spends the rest of his time summoning "the monsters and angels" of his imagination for his enchanting tales.

Bradbury's imagination has yielded classic books such as "Fahrenheit 451," "The Martian Chronicles" and 600 short stories that predicted everything from the emergence of ATMs to live broadcasts of fugitive car chases.

Bradbury, who turns 90 this month, says he will sometimes open one of his books late at night and cry out thanks to God.

"I sit there and cry because I haven't done any of this," he told Sam Weller, his biographer and friend. "It's a God-given thing, and I'm so grateful, so, so grateful. The best description of my career as a writer is, 'At play in the fields of the Lord.' "

Bradbury's stories are filled with references to God and faith, but he's rarely talked at length about his religious beliefs, until now.

'Joy is the grace we say to God'

He describes himself as a "delicatessen religionist." He's inspired by Eastern and Western religions.

The center of his faith, though, is love. Everything -- the reason he decided to write his first short story at 12; his 56-year marriage to his muse and late wife, Maggie; his friendships with everyone from Walt Disney to Alfred Hitchcock -- is based on love.

Bradbury is in love with love.

I once asked him if he prayed, and he said, 'Joy is the grace we say to God.'
--Sam Weller, Ray Bradbury biographer

Once, when he saw Walt Disney, architect of the Magic Kingdom, Christmas shopping in Los Angeles, Bradbury approached him and said: "Mr. Disney, my name is Ray Bradbury and I love you."

Bradbury's favorite book in the Bible is the Gospel of John, which is filled with references to love.

"At the center of religion is love," Bradbury says from his home, which is painted dandelion yellow in honor of his favorite book, "Dandelion Wine."

"I love you and I forgive you. I am like you and you are like me. I love all people. I love the world. I love creating. ... Everything in our life should be based on love."

Bradbury's voice booms with enthusiasm over the phone. He now uses a wheelchair. His hearing has deteriorated. But he talks like an excitable kid with an old man's voice. (Each Christmas, Bradbury asked his wife to give him toys in place of any other gifts.)

Bradbury was raised as a Baptist in Waukegan, Illinois, by his father, a utility lineman, and his mother, a housewife. Both were infrequent churchgoers.

His family moved to Los Angeles during the Great Depression to look for work. When he turned 14, Bradbury began visiting Catholic churches, synagogues and charismatic churches on his own to figure out his faith.

Bradbury has been called a Unitarian, but he rejects that term. He dislikes labels of any kind.

"I'm a Zen Buddhist if I would describe myself," he says. "I don't think about what I do. I do it. That's Buddhism. I jump off the cliff and build my wings on the way down."

Examples of faith in Bradbury's stories

Bradbury started writing for pulp magazines like "Weird Tales" and "Thrilling Wonder Stories" at the beginning of his career. But even then, faith was an important theme.

In his 1949 story "The Man," Bradbury tells the story of a rocket crew landing on Mars, only to see their thunder taken by a Christ-like figure who had arrived only hours earlier.

In subsequent stories such as "Bless Me, Father, For I Have Sinned," priests and other ordinary people search and find redemption.

Allusions to Christianity are common in his stories, but Bradbury doesn't define himself as a Christian. He considers Jesus a wise prophet, like Buddha and Confucius.

"Jesus is a remarkable person," Bradbury says. "He was on his way to becoming Christ, and he made it."

Weller, also author of "The Bradbury Chronicles: The Life of Ray Bradbury," says Bradbury's religious antenna is most attuned to Christianity.

"The guy keeps writing about Jesus, but he doesn't consider himself a Christian," Weller says.

"He says faith is necessary but that we should accept the fact that when it comes to God, none of us know anything."

I jump off the cliff and build my wings on the way down.
--Ray Bradbury, legendary sci-fi author
RELATED TOPICS

The Rev. Calvin Miller, author of the New Testament novels "The Singer Trilogy," sees an optimism in Bradbury's stories that's reflected in the Judeo-Christian belief that there will be a "new heaven and a new Earth" one day.

Miller once wrote an essay about Bradbury's "Christian positivism," titled "Hope in a Doubtful Age," that was published in "Christianity Today," an evangelical magazine.

After the essay appeared, Miller says, he was sorting through mail at home when he noticed two thank-you letters from Bradbury -- one written when the author was headed to Paris for vacation and another when he arrived.

The following Christmas, Miller says, he received something else from Bradbury.

"Every Christmas afterward, he sent me a card," Miller says. "I guess the religious implications of the article meant a lot to him."

Will space travel destroy our belief in God?

The religious implications of space travel also mean much to Bradbury.

Bradbury has been a relentless supporter of space exploration. Ascending to the heavens won't destroy God; it'll reinforce belief, he says.

"We're moving more toward God," he says. "We're moving toward more proofs of his creation in other worlds he's created in other parts of the universe. Space travel will increase our belief in God."

As he approaches the end of his journey, Bradbury is still conjuring his monsters and angels. His latest book, "Summer Morning, Summer Night," was released last month.

Many of his best friends, though, are not around to read him anymore.

"My personal telephone book is a book of the dead now," Bradbury told Weller in his book of interviews. "I'm so old. Almost all of my friends have died, and I don't have the guts to take their names out of the book."

Bradbury is also concerned about something beyond his own mortality: humanity's survival.

Space travel and religion seek the same goal -- immortality, Bradbury says. If humanity remains on Earth, it is doomed because someday the sun will either explode or flame out.

Everyone -- not just the characters in his story -- must eventually explore the stars, he says.