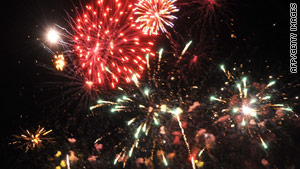 (Mental Floss) -- Want to be cremated, but worry that your ashes will just end up sitting in some boring urn?

Fear not! Have a look at these 10 bizarre places that ashes have gone.

1. Into a comic book

When longtime Marvel Comics editor Mark Gruenwald died in 1996, he left an interesting final wish: he wanted to have his ashes mixed into the ink used in one of Marvel's titles. The company obliged by reprinting a 1985 collection of the Gruenwald-penned Squadron Supreme with the specially prepared ink in 1997. Gruenwald's widow, Catherine, wrote in the book's foreword, "He has truly become one with the story."

Writer Hunter S. Thompson literally went out with a bang. Thompson's appropriately gonzo 2005 memorial service featured a fireworks show in which each boom and crack dispersed some of the writer's ashes. Johnny Depp underwrote the fireworks display at a cost of $2 million.

3. Into a Pringles can

The name Fredric Baur may not ring any bells, but you know his most famous creation. In 1966 Baur invented the Pringles can so Procter & Gamble could ship its new chips without using bags.

Baur was so proud of the achievement that he told his children he wanted to be buried in the iconic can. When he died in 2008 at 89, they honored his wishes by placing his ashes in a Pringles can before burying them.

According to his son Larry, Baur's children briefly debated what flavor canister to use before settling on original.

More than anyone, Edward "Steady Ed" Headrick was responsible for transforming the Frisbee from a fad toy into a valued piece of sporting equipment. While working as a manager at Wham-O, Headrick designed numerous improvements to the flying disc, and during the 1970s he created the sport of disc golf.

Before his 2002 death, Headrick told his children that he wanted to have his ashes mixed into the plastic for a batch of Frisbees. His hope was that the proceeds from the sales could help establish a disc golf museum, but he also wanted to have a bit of fun.

Headrick's son Daniel later told the San Francisco Chronicle, "He said he wanted to end up in a Frisbee that accidentally lands on someone's roof."

Headrick's wish came true, and the discs are quite valuable as collectors' items now. A two-disc set fetches upwards of $200 on Amazon.

There's no more fitting way for a hunter to go out than this. When James Booth, a British expert on vintage shotguns, died in 2004, his wife asked an ammunition company to mix his ashes into a batch of shotgun shells.

The Caledonian Cartridge Company happily complied and presented Joanna Booth with 275 12-gauge cartridges containing James' ashes; a minister even blessed the shells. The widow then invited a group of close friends over for a hunt, and the group used the cartridges to bag ducks, pheasants, and partridges.

Looking for the remains of '60s icon and LSD advocate Timothy Leary? You're going to need a space shuttle.

In 1997 Leary's remains were on the first rocket to send cremated ashes into space. Star Trek creator Gene Roddenberry's ashes went into orbit on the same flight.

Space burial company Celestis will send a portion of anyone's remains into the final frontier for a fee. According to the company's website, your ashes can go into Earth orbit for $2,495, find their way into lunar orbit for $9,995, or make the trek into deep space for $12,500.

Mental Floss: 10 things your body can do after you die

When English parents Mark and Lisa Richmond tragically lost their son Ayden when he was just two years and four months old, they wanted to find a fitting way to honor his memory.

The couple owned a tattoo parlor, so they decided to remember the boy with a bit of ink. Mark got a seven-inch portrait of Ayden tattooed on his chest using ink that had been mixed with his son's ashes.

If you're a sea lover, Eternal Reefs can help turn your remains into a permanent reef. After the ashes are mixed into concrete, the reefs go into the water and provide a new habitat for fish and other marine life. A 2' x 3' Aquarius Memorial Reef will set your loved ones back $3,995.

LifeGem can take the ashes of a departed loved one and convert them into a diamond. The process looks basically identical to the production of synthetic diamonds, except the carbon used to kick start the production comes from the cremated remains.

In 2007 music mag NME asked Rolling Stones guitarist to name the strangest thing he'd ever snorted. The reporter was probably expecting an odd answer given Richards' legendary proclivity for partying, but Richards' response was a jaw-dropper.

Richards told the magazine, "The strangest thing I've tried to snort? My father. I snorted my father. He was cremated and I couldn't resist grinding him up with a little bit of blow."

Richards went on to explain that snorting a rail of dear old Dad hadn't caused him any health problems and that he didn't think his old man would have cared.

The remarks sparked a predictable media firestorm, though, and the Stones' publicist released a statement calling Richards' story "an off-the-cuff remark, a joke." Richards himself later revised the tale and said that he planted his father's ashes at the base of an oak tree.