Men may travel light, but some pack teddy bears

By John DeVore, The Frisky 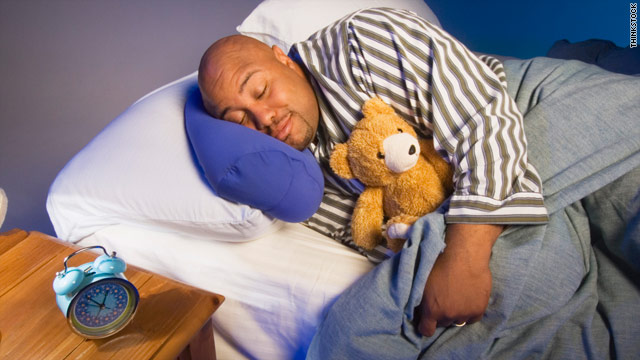 A recent study found that one in four men takes a teddy bear with him when he travels for business.
STORY HIGHLIGHTS
RELATED TOPICS

(The Frisky) -- A recent study by British hotel chain Travelodge has found that 25 percent of men take teddy bears on the road with them when they travel for business. These men report that their stuffed animals remind them of home and the significant others they have to leave behind.

This is a shocking survey to many, who believe that grown men shouldn't tote around stuffed animals, as it betrays certain masculine gender rules.

For one, men snuggle as a means to an end. Men snuggle in order to procure sex, or as payment for services rendered.

Men are also encouraged to put away childish things more than women or, at least, their toys aren't supposed to look like toys. Women are rewarded for holding on to the innocence of youth, which comes in handy when raising a child. This is all completely ridiculous, of course.

The Frisky: 1 in 5 of you are in love with someone else

When it comes to stuffed animals, the only difference between women and men is that women keep their dolls on their bed, and men keep them under the bed, or in my case, in a box in the back of my closet.

I still have my favorite stuffed animal from when I was a wee little lad, a tattered, well-loved doll-version of Grover from "Sesame Street." (I always thought of him as the drunk, anorexic cousin of Cookie Monster.)

I've dragged this toy around with me everywhere I've lived. I'm not ashamed of this fact. That I own a stuffed animal doesn't reduce the lethality of my karate death chop, or the enthusiasm with which I consume beer.

Grover is my original gangster, my last line of defense against bogeymen and bogeywomen, a powerful totem vibrating with powerful mojo.

The Frisky: 6 celebs who removed their implants

While I don't travel with Grover, I applaud these men who carry their stuffed animals with them on their travels. These guys risk public ridicule whenever their baggage is searched. They are committed to these sentimental tethers to their home.

And, I understand the basic manly guy reaction to this survey: Men don't play with frou-frou toys. But most guys I know who won't admit to having a stuffed animal have a desk adorned with action figures, which are just dolls with muscles.

If they don't own a Wolverine figure, then at the very least they have some kind of lucky charm. Dudes are a superstitious lot. We keep and hold on to objects that make us feel secure.

I've known plenty of men with lucky crosses, coins, and stones. I have a friend who has a lucky 10-sided Dungeons & Dragons die. He had it in his pocket once during a car accident and he swears it saved his life. Unfortunately, it doesn't help him at poker. (Like, ever.)

Show me a professional baseball player, and I'll show you a million-dollar paranoid guy with a locker full of magical trinkets.

In addition to Grover, I also have various good luck charms. I have an actual cobra preserved in a bottle of rice wine a friend of mine brought back from Vietnam for me. I have multiple Edgar Allan Poe action figures, as I do love that emo-goth basket case. I also have a plastic hippo and a plastic Virgin Mary that my mother gave me when I was about to go to college.

All I can say is, my personal version of "Toy Story" would be so much more awesome than the current one. C'mon, think about it. Whenever I leave my apartment, a dead snake, a drunken poet, a Muppet and the most dangerous land animal in Africa come alive and have adventures! I'd buy all the tickets.

I imagine there are also women out there who would judge a guy for having a teddy bear. Which I sort of get, but there are more obvious signs than a stuffed toy that your new boyfriend is wearing a sagging pair of emotional diapers.

Does he pout? Does he refuse to share his desert?

But then again, gender stereotypes wouldn't be stereotypes unless both genders conspire to maintain the status quo.

Women want a sensitive guy, but they also want lumberjacks who can cut down trees with their foreheads. But to those women who cringe at the thought that their man might be packing a Cabbage Patch Doll in his suitcase, isn't it better they share their hotel room with a Beanie Baby rather than another woman?

As I wrote, however, I don't travel with Grover. That blue, fuzzy monster stays packed away. He's nothing more than a reminder that once I was knee-high. That I built forts out of couch cushions. A time when clouds made shapes expressly for my amusement and chicken nuggets were Turkish Delights, those otherworldly treats that were so delicious a brother betrayed his siblings in "The Lion, The Witch, and the Wardrobe."

On the odd occasion that I pull Grover from his internment, it's as if I can hold him up to my ear like a seashell and hear the roar of the past. The sounds of little feet running down carpeted stairs, and laser gun fire, and hilarious belches.

It's difficult to judge how far one has traveled without remembering where one began the journey.