Is getting a job really about who you know? 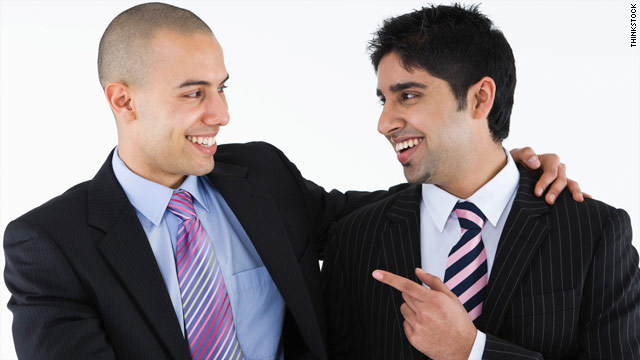 Having a connection at a company you want to work for can increase your chances of getting hired.
STORY HIGHLIGHTS
RELATED TOPICS

(Careerbuilder.com) -- According to real estate experts, the biggest influence on a person purchasing a home is location, location, location. Without the perfect view or proximity to good schools, a great house can sit on the market for months.

In a job hunt, some experts say that connections are the most important influence in landing a job.

Without a personal referral to pass your résumé along to a manager or who can put in a good word for you, your chances of landing a job are supposedly nonexistent. You'll hear this over and over again, and advice givers will tell you to network as much as possible.

But is it true? Sure, networking seems like a likely aid for a job hunt, but not every person landing a job these days these days can have a direct contact at the company.

Statistically it seems unlikely that the only people getting job offers are those with the right connections. Job seekers have enough to worry about without panicking that their lack of connections is dooming their hunt before it begins.

Rather than pretend to have a simple yes or no answer to this question, we asked job seekers, employers and experts to weigh in with their experiences.

"I would say without a doubt that it's not the number of connections, it's the physical connecting that gets you hired. You don't get referred if you don't connect with someone in a way that makes them trust you enough to refer you. Moreover, even if you are referred by 10 respected people to the hiring manager, if you don't connect with her or him, you won't get hired."
-- J.T. O'Donnell, founder and president of Careerealism.com

"The last four jobs I've had I've gotten through some kind of networking -- all four through different circumstances:

1. A friend inside the company served as a referral.

2. A friend inside the company put my résumé at the top of a 300-plus résumé pile by bypassing the recruiter and e-mailing it to the hiring manager directly (which she was able to see since she was internal and had the visibility).

3. A mentor at the previous job put me in touch with some of her connections, one of whom worked for a company that turned out to be looking for someone.

4. I cultivated a relationship with an industry peer/senior executive via e-mail and Facebook over a year and a half. When she took a job as a managing director at a new firm, we met in person for the first time for lunch. Turned out she was looking to build her practice group and I was looking for new opportunities. It was synergistic. I'm currently in this position."
-- Meredith Obendorfer, account manager at SparkPR

"Fair or not, I don't know, but I can say from my own experience that having connections is the most important thing a person can have when looking for work. I'm only 25, but in the three jobs I had in college and one professional job after, I got every single one of them based on my connections. In fact, I've never sat through a formal interview in my life."
-- Tyler Tervooren, author of "Advanced Riskology"

"Connections, or networking, is more important than ever because in this down economy there are so many applicants that employers don't have time to perform the culling and elimination processes they once did. They are also less inclined to take a chance on an employee who comes only through a traditional application process, without the endorsement of one or more valued associates or colleagues.

Job seekers, therefore, must hone their networking circuits to get themselves connected to the right employment opportunities."
-- Sandra Lamb is a career expert and the author of "How to Write It, Personal Notes"

"No, not all people are getting their jobs via networking and connections, but that is the best way to do it. However, many people have some odd assumptions on networking:

2. Sometimes effective networking does not involve networking in a company, it involves connecting people to recruiters and placement companies. Focusing your networking only on specific companies ignores the fact that recruiters are out there.

3. Networking requires definite planning and effort and tools. (A great reference are the books of Orville Pierson, which I strongly recommend anyone read.)

4. Most people ignore the simplest networking start -- telling every friend, family and co-worker or past co-worker they want a job."
-- Steven Savage, a technology project manager, writer and blogger

Careerbuilder.com: 7 questions not to ask at an interview

"You can have all the same credentials under your belt as the person that got the job over you, but they knew someone in the department. There is nothing wrong with that, but it definitely helps if someone can put in a good word for you rather than going in not knowing a soul.

It's happened to me many times. I didn't get a job over someone because their dad or mom knew someone within the company, even though I had more experience, etc., than the other kid did.

Just how it goes. But if you can network with others and let them know what you're interested in, you never know what might fall into your lap. Luck has nothing to do with it; you can work hard and get places, that's for sure, too."
-- Ashley Bodi, co-founder of Business Beware

"Word of mouth won't land you a job. But connections may help you get an interview at the places you apply to. For other jobs, connections are crucial. In freelancing, for example, it really helps if you know the editor well when you send your pitch letter. But in more conventional jobs, you still need to go the traditional route."
-- Berit Brogaard, associate professor of philosophy and psychology at University of Missouri--St. Louis

"It's not so much about 'you knowing them' but more importantly, 'them knowing you!'

It is rare that the person hiring you is your good buddy. In fact, in most organizations, that might come off as a conflict of interest. What I have experienced time and again is that when you know someone within the organization, they have the ability to put in a good word for you so that the hiring manager can get to know who you are."
-- Arash Afshar, MrArash.com

Careerbuilder.com: 5 ways to rehab your resume

"The only method that is a guarantee for getting a job is a method called 'luck.' Unfortunately, luck is not something that is easily created or designed and so, for most people, many other methods are necessary. There is probably only one truth: Never rely on any one method. All avenues for getting a job are needed.

Yes, networking and connections are probably the best way to go about getting a job and reflect the best use of time. But networking and who you know need to be combined with a strong sense of what kind of jobs to pursue.

You really need a system for marketing yourself to and through others. You need to have a solid set of connections complemented by a marketing program that promotes your brand and that promotes why you are a more valuable employee addition than somebody else."
-- Larry Chiagouris, author of "The Secret to Getting a Job After College: Marketing Tactics to Turn Degrees Into Dollars"