True tales from work: I work with my ex 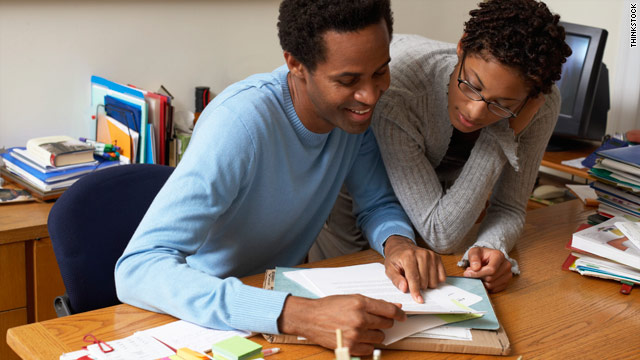 Getting too close with a coworker can make for a difficult breakup.
STORY HIGHLIGHTS
RELATED TOPICS

(CareerBuilder.com) -- There's a ton of breakup advice out there, but one of the most frequently prescribed methods of getting over heartbreak quickly is the "clean break." Meaning that once you break up with someone, it's best to just completely steer clear of each other for a while to avoid confusion, fights and reopening emotional wounds.

However, making a clean break can be awfully hard if you walk by your ex's cubicle on your way to the office copy machine every day.

Following, three workers dish on the good, the bad and the ugly of working with an ex.

Careerbuilder.com: Overworked or challenged at your job?

Rhonda Sanderson was inspired to start her own public relations firm after going through a divorce almost 20 years ago. A decade later, when Sanderson was badly injured and her business was threatened, it was her ex-husband who stepped in to help run the firm.

"We tend to argue in a different manner than you would with a co-worker, but it's also great because I know we really care about each other and our mutual child so it's like we are building something together to benefit her," Sanderson says.

"It helps me because we are still very close, and no matter what happens here, I know he is always in my corner and does a lot of extra things to try to make my life easier. Employees come and go, but he is always at my side," she says.

Though Sanderson says she enjoys working with her ex, she still doesn't recommend the situation to other people.

Careerbuilder.com: Is getting a job really about who you know?

"I was a DJ at an ice rink, she was a figure skater ... we fell in love and we worked beautifully together," says Jim Dailakis, a comedian from New York City. "I couldn't wait to go to work. I already enjoyed my job, but knowing that I was going to go and see her as well, that was just icing on the cake."

Unfortunately the relationship didn't work out.

"We realized that we had a lot of differences. I wanted to go to New York to pursue a dream; she wanted to get married and have children," he says.

Dailakis says that for a while after the breakup, going to work was awkward, and both he and his ex went through periods of jealousy and frustration.

"Everything was going fine and [was] very civil until she saw that women were attracted to me. Talk about the evil eye," he jokes.

"I think one of the toughest things to do is to break up with somebody that you work with who you don't have any grudge against but it just isn't working out -- but in many ways, it was much easier. It [forced] the two of us to be civil."

"We were friends for a year, dated for three, and then exes for two, all while working at the same company -- in the same department -- and literally sat right next to each other for all six years with nothing but a thin, 5-foot piece of plaster and plastic separating us," says Katie, a graphic designer.

"For the first year, he repeatedly asked me out and I repeatedly warned him of the potential for co-worker relationship perils. Eventually the friendship gave way and we hooked up, after a company picnic no less. Very cliché."

Two years after the pair began dating, they had their first breakup.

"The first [time] was his choice," Katie says. "It was very sad and I felt crushed for several weeks because he seemed so happy while I was miserable. After a couple months the roles reversed, however. I was happy, he was miserable. He wanted to get back together, which made for a very uncomfortable working environment. But because I thought I still loved him, and I'm sure because we saw each other five days a week, I eventually caved."

After happily dating for another year, they came to a crossroads. Katie wanted to get married, her ex didn't, and they broke up again.

"The break was relatively mutual, a little more friendly and a little less sad than the first, but because he started dating a girl (whom I knew he had a crush on) two weeks after our breakup, this led to the more painful and awkward experience I hadn't expected," she says. "I could hear him talking on the phone to his new girlfriend. I knew exactly why he would stroll into work late in the mornings. I saw him make love-y mix CDs for her just like he did for me."

Then, Katie's ex became her supervisor.

"He even did my annual review. It was pretty awful for a long, long time," she says. "I honestly wasn't in love with him anymore, but that didn't make things any better. It seemed as though it was so easy for him to move on and that made me angry. It made it that much more difficult to move on from everything. My only hope was to find a new job, and believe me, I tried. But this was smack dab in the middle of the failing economy and jobs were few and far between, especially for designers."

While she looked for a new job, Katie says she held her head high and didn't air her dirty laundry at the office.

"To enter into -- and perhaps exit out of -- a co-worker romance, you have to be strong, independent, patient and, above all else, so mature you make the Dalai Lama look like a 2-year-old. I didn't take my troubles out on my co-workers. Most of them didn't even know he and I broke up until months later. I found a couple confidants at work, but tried to keep my complaints light and not burdensome. I didn't bottle it up, but I tried not to dwell either."

Luckily, Katie found a new job two months ago. She is also in a new relationship -- and it's not with a co-worker.