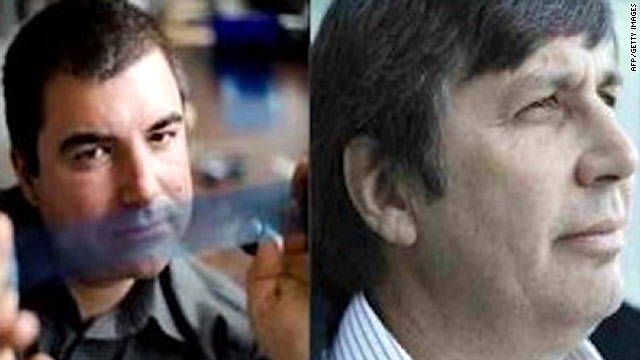 Konstantin Novoselov and Andre Geim received the Nobel prize for physics for their work with Graphene.
STORY HIGHLIGHTS
RELATED TOPICS

(CNN) -- The 2010 Nobel prize for physics was awarded Tuesday to two professors from the University of Manchester in England for "groundbreaking" experiments with the two-dimensional material graphene.

The professors are Andre Geim and Konstantin Novoselov, both originally from Russia.

"I didn't expect the Nobel prize this year because I thought this year would be the year of astrophysics," Geim told reporters by phone after the win.

Graphene is one of a class of two-dimensional materials discovered by Geim's research group at the university, according to Graphene Industries, which says it has worked closely with Geim. It consists of a hexagonal array of carbon atoms, just like those found in bulk graphite, but is "fundamentally different" from the familiar three-dimensional material, in part because it is flexible.

"The discovery of two-dimensional materials means that scientists now have access to materials of all dimensionalities, including zero-dimensional (quantum dots, atoms) and one-dimensional (nanowires, carbon nanotubes)," according to Graphene Industries.

Geim said it is impossible to describe the range of possible uses for the material.

"Imagine 100 years ago and someone found amazing properties of polymers, and at that moment, you don't know what to do with polymers -- you can only imagine the range of applications," Geim said.

"I hope that graphene and other two-dimensional crystals will change everyday life as plastics did for humanity."

Tuesday is the second day of Nobel Prize announcements across a range of areas.

In the coming days, the committee will announce prizes in chemistry, literature and peace. The prize in economics will be announced Monday.