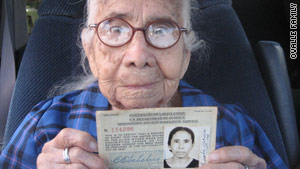 Eulalia Garcia Maturey, 101, has kept the "Legal Entry" document she received 69 years ago in pristine condition.

Brownsville, Texas (CNN) -- Eulalia Garcia Maturey has outlived two husbands, her two children and decades of bygone immigration laws. At 101, Maturey will become a U.S. citizen on the 101st anniversary of her crossing into the United States from Mexico.

The naturalization ceremony will take place Tuesday afternoon in a federal courtroom in Brownsville, Texas, according to the Department of Homeland Security's Citizenship and Immigration Services.

Maturey described the feeling of becoming a citizen with one word: "Libre," Spanish for "free."

And then in a feisty Spanish voice that makes it hard to believe she's only 4-foot-7, she explained why becoming a citizen at this late stage of her life is so important.

"I want to spend the rest of my days in this life living legally in the United States," Maturey told CNN this week. "I was raised here, and I want to die here."

Maturey also said she feels American in every way but knows that technically she's not an American, at least not yet.

Eulalia Maturey's path to citizenship is a tale that captures the unusual way of life on the Texas-Mexico border.

On October 12, 1909, Maturey was just a baby in her mother's arms crossing the Rio Grande on a ferry boat from Matamoros, Mexico, into Brownsville, Texas.

In those days, crossing the border was a simple routine. There were no border patrol agents, and checkpoints focused on customs and trade issues, according to Anthony Knopp, a history professor at the University of Texas at Brownsville specializing in U.S.-Mexico border relations.

"We were on the fringe back in those days," said Knopp. "It wasn't hard to cross the border. There was nobody looking to round people up and send them back to Mexico."

Maturey and her single mother settled into a quiet life in Brownsville. Her mother earned money washing clothes, but she never met her father. Maturey dropped out of school after third grade.

"I didn't want to go anymore," Maturey said. So then she started helping her mother sift through the growing piles of laundry that needed to be washed and folded.

Maturey married her first husband at 16; he died five years later. Shortly after, she married her second husband and had two children.

In 1940, Congress passed the World War II Alien Registration Act, which made it a federal crime to advocate overthrowing the government. But the law also required noncitizens already in the country to register with the government. Maturey did so along with millions of others in the United States.

Just before the start of World War II, Maturey received a "Certificate of Lawful Entry" card from the U.S. government issued to her on April 4, 1941. She never imagined that little document would make it possible for her to become a U.S. citizen. She figured it came with an expiration date.

For decades, Maturey didn't really know what her legal status was in the United States. She feared asking too many questions might get her deported. She crossed the border routinely to visit family in Mexico. Border agents rarely asked for any documentation and when they did, she simply called herself a U.S. citizen.

Then in 2008, the United States started requiring everyone to show a passport when crossing the border. Maturey knew she couldn't take anymore chances; it was time to find out once and for all where she stood.

Maturey's niece, Yolanda Ovalle, took her to the U.S. Citizenship and Immigration Services office in Brownsville, and that's where they met Sheila Lucio, a 29-year veteran of the government agency.

"I fell in love with her. She's real feisty," Lucio told CNN.

When Lucio tried finding Eulalia Maturey's name in the computer system, she couldn't find it.

"If you came to us before we entered the computer age, we didn't have your records," said Lucio.

So Maturey pulled out that 69-year-old "Lawful Entry" card. Her niece says she took care of that little piece of paper for decades. "The permit is perfectly cared for," said Yolanda Ovalle. "She's a perfect lady."

With that document, government officials were able to find her Legal Permanent Resident documents in the archives in Washington.

"We would never have been able to establish her registration status without that document," said Maria Elena Garcia-Upson, a public affairs officer with the U.S. Citizenship and Immigration Services. "It would have been hard to prove."

The paperwork is all squared away. Maturey passed the citizenship exam and now 101 years after that short ferry ride across the Rio Grande with her mother, Eulalia Maturey is set to become a citizen of the United States.

It will be an emotional day for Maturey's family, but they've never seen her cry and they wonder if this will be the day they'll see a tear.