Museum is home for a month for Chicago woman 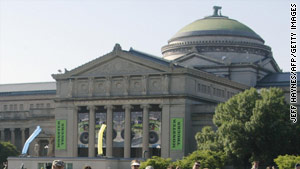 Kate McGroarty will receive $10,000 at the end of her month-long stay at the Chicago Museum of Science and Industry.
STORY HIGHLIGHTS
RELATED TOPICS

(CNN) -- One of the exhibits at the Chicago Museum of Science and Industry has come to life, literally. It's reminiscent of the wildly popular "Night at the Museum," movies, except this is real.

Twenty-four-year-old Kate McGroarty is living at the museum for a month, roaming the large 14-acre space, exploring every nook and cranny at all hours of the day and night, sleeping where she wants, and basically seeing sights that most people never get to see.

McGroarty won a "Month at the Museum" promotional contest, beating out 1,500 other applicants for the opportunity to call the museum home for a few weeks.

She won based in part on her answer to a question about how a month in a museum could change or transform a person's life. "I've always loved this museum, and I've always really loved adventure. And I'm hugely passionate about education, and I saw this as really interesting social experiment and an interesting education-through-social-media kind of experiment," says, McGroarty, who will get $10,000 at the end of her month-long stay.

Museum of Science Vice President and Chief Marketing Officer Rob Gallus concedes that the "Night at the Museum" movies were part of the whole "whimsy" of the Month at the Museum promotion.

"Everybody wonders, 'Wow, what would I do if I were alone in the museum at night? Where would I go? What would I see? What strange things do happen after dark in the museum?'" says Gallus.

McGroarty, who works for a travel company in Chicago as well as working in local theater, moved into the largest science center in the Western Hemisphere last week. She has a couple of private rooms near the museum's administrative offices and a large, glass cube science office. It's her exhibit display case on the museum's main level, where she updates her daily online blog and tweets about what she's learning and seeing.

"She has unlimited access to every nook and cranny of the museum. She can sleep on the U-505 submarine or in the smart home. She can get to all those out of the way places that people can't get to," Gallus told CNN Radio.

Her meals are catered, and she can leave the museum as needed for errands or other reasons.

Part of McGroarty's responsibilities for the month require that she mingle with museum guests. And she says that's been a lot of fun. She's become a sort of rock star of sorts, with crowds flocking to the Chicago Museum of Science and Industry to see her and follow her online.

"I love, love interacting with the school groups that come by. They have the best questions," she says. "They're so inquisitive. They're so energetic. I love them. And just seeing how they react to all the exhibits is so exciting for me."

At night, museum staff members are on duty as are the usual security personnel, but in the sprawling complex they may be under the same roof yet not-so-near at the same time.

"It is a completely different world," says McGroarty.

"It's not spooky. If anything it's just a very quick and hard transition from there being so many people -- like on Saturday, we had 4,200 people in attendance. Then to go from that to just the security staff -- it's a big staff, but it's also an enormous museum. So you can walk around for long periods of time without seeing absolutely anyone. I wouldn't call it scary. I would say it is a different kind of experience, maybe a little bit spooky, but nothing to keep me in my room at night."

McGroarty doesn't have a set schedule of displays or exhibits she plans to explore during her month-long adventure, but she said she does have one very definite must-do before her adventure is over. She plans to climb to the top of the museum's dome to see the sunrise over Lake Michigan.

McGroarty, originally from Minnesota, attended Northwestern University in Illinois and majored in theater. She graduated two years ago and has spent time teaching, performing and writing.

She laughingly jokes, "I'm not certain if anyone ever had this particular job in mind."

McGroarty says the whole experience, so far, has been very overwhelming. She's shot to sudden fame -- she's getting tweets from people around the country who are following her adventures in the museum.

"Last night I was talking to a woman who said that her daughter, her 7-year-old daughter, is so into this, she comes home every day and checks to see if I've made a blog update," says McGroarty.

"This is day five. And she has to tell her daughter that she has to finish her homework before she can read my blog post."