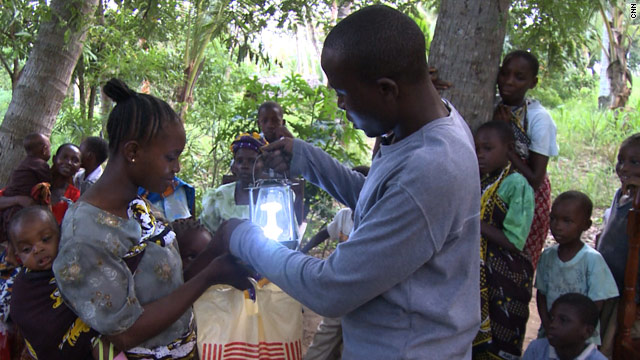 Editor's Note: CNN Heroes received more than 10,000 nominations from 100 countries, and a Blue Ribbon Panel selected the Top 10 CNN Heroes for the year. Voting for the CNN Hero of the Year continues through November 18 (6 a.m. ET) at CNNHeroes.com. The winner will be announced at "CNN Heroes: An All-Star Tribute," which airs Thanksgiving night, November 25, at 8 ET.

(CNN) -- Evans Wadongo, 23, invented a way for rural families in Kenya to replace smoky kerosene and firelight with solar power. Through his Use Solar, Save Lives program, he has distributed an estimated 10,000 solar lanterns for free.

Wadongo's work earned him a spot as one of CNN's Top 10 Heroes for 2010. Below are his thoughts on being selected for this honor.

Q: Where were you when you got the call that you'd been selected as a Top 10 CNN Hero?

Evans Wadongo: I was sitting watching a comedy show on a local TV station here in Nairobi when I got the call from CNN. At first, I thought they were just calling to ask questions. Then I was told I was in the Top 10. Wow! I am so, so excited.

I wish to thank the Blue Ribbon Panel for choosing me. I really feel humbled, considering all the amazing work being done by all of the CNN Heroes highlighted this year.

Wadongo: I do hope that being in the Top 10 will create even more publicity about the work that we are doing to help poor communities. We really hope to get support from individuals -- and more so from corporate companies and other nonprofits -- to reach our target of lifting 100,000 households out of poverty by 2015, by giving them lamps and helping them to set up economic ventures. We want to set up a modern workshop, with modern equipment that will include a plastic recycling plant, all for making the lamps. We need support to do this.

Q: What do you want people to know most about the importance of your work?

Wadongo: Just seeing livelihoods change, especially from the small economic ventures that are being set up [with] the money initially spent on kerosene ... it's the best thing we can ever do for these communities.

I can talk and talk forever, I am just so excited now. I really feel encouraged, and I will wake up with more energy to do more.