Try these 'in the mood' foods 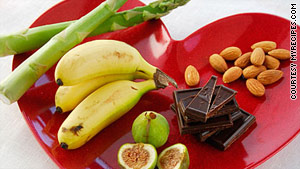 Some of the foods that may improve your love life, styled by Mindi Shapiro Levine.
STORY HIGHLIGHTS
RELATED TOPICS

(MyRecipes.com) -- Since Aphrodite, Greek Goddess of Love, appeared on the scene in mythology, modern-day diners have been trying to bring her back to the dinner table. We can help.

Dating back to the Aztecs, a sultry rumor existed that certain foods could either increase sex drive or enhance fertility. According to the buzz-kills at the U.S. Food and Drug Administration, sampling chocolate, oysters, and asparagus might make you feel more amorous, but it won't do a thing for your sex drive. Myths and legends aside, we choose to believe that you can make a little magic with a mouthwatering recipe. Why not try a few using these alleged aphrodisiac foods and see what happens?

The Aztecs called chocolate the "food of the gods", perhaps because it contains chemicals thought to affect neurotransmitters in the brain. Chocolate also contains a caffeine-related compound called theobromine, which acts as a mild stimulant. Whether it was their minds or their hearts racing after nibbling on the rich treat, we're confident that everyone left the ancient dessert buffet happy.

A second century A.D. writer documented oysters as an aphrodisiac when he described the wanton ways of women after they had been eating oysters and drinking wine. Oysters also contain zinc, a mineral famous for fighting cold symptoms, that also controls libido-altering progesterone levels and is rumored to stave off impotence.

While some foods get all the hype for their flavor or texture, others shoot into aphrodisiac stardom solely based on their shape. Rich in potassium and B-vitamins, vitamins necessary for the production of certain steamy hormones, bananas rule the symbolically suggestive category for Mood Foods.

Dating back to the days of Samson and Delilah, when it's reputed that Samson pursued the long-haired beauty with branches from an almond tree, the nuts have been a symbol of fertility. Plus, the aroma of almonds was thought to induce passion in a woman.

In Medieval times, mead--a fermented drink made from honey--was used as an aid to seduction. In many parts of Europe, newly married couples were supplied with enough mead for a month in order to sweeten the marriage. From this practice comes the modern tradition of the honeymoon.

Also known as "rocket", the seed of this leafy green has been documented as an aphrodisiac since the first century A.D. It was often combined with pine nuts and pistachios. Representing "the seed," foods such as bulbs, eggs, snails were considered to have sexual powers stemming from their ability to grow, produce, or just remind diners of the possibility of an after-dinner dessert to remember.

The Queen of The Nile, Cleopatra herself, often craved this juicy fruit. Long-celebrated for its ancient reputation for boosting fertility (they can boast over 1000 tiny seeds inside each piece of fruit), figs also get added Mood Food status for their overall appearance.

The next time you start to dip your chip, remember that the Aztecs heralded the avocado tree as loincloth-girding ground. The fruit from the tree hangs in pairs, making it a symbol of male strength and fertility.

Nineteenth century bridegrooms were served three courses of asparagus because of its reported aphrodisiac powers. This recipe offers double the love power because ginger is considered an aphrodisiac spice.