By Sara Bonisteel, Special to CNN 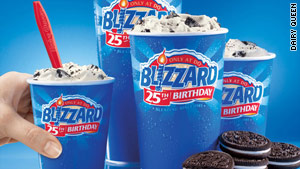 (CNN) -- Fast-food restaurants that have long catered to the hungry patron with super-sized entrees are now targeting the nibbler, offering smaller, snack-sized portions.

Dairy Queen is the latest eatery to shrink a popular menu item. In late July, it plans to roll out a 7-ounce Mini Blizzard, 5 ounces tinier than its current "small" frozen treat.

"They really requested a smaller-portion size of our blizzard -- smaller appetites. We also felt there was an opportunity there with a smaller size Blizzard -- which is our signature product -- to perhaps bundle it with a combo meal or a food meal, as well."

Dairy Queen isn't the only big-name restaurant shrinking menu items. Last February, Burger King introduced a line of mini-burgers called "BK Burger Shots." Executives at the time touted that while the product "might look small ... they are full of the big, flame-broiled taste."

There have been sporadic attempts to downsize on fast-food menus in recent years. Denver-based Quiznos, began offering a tiny wrap sandwich called the Sammie geared to snackers in 2007.

And doughnut shops like Dunkin' Donuts have fed the masses with doughnut holes rebranded as "Munchkins" (or Timbits, if you're a patron of Tim Hortons).

DQ unveiled its Mini Blizzard after seven months of testing in about 100 of its 5,700 stores. The new size comes on the 25th birthday of the frozen treat and the 70th anniversary of the chain.

"We really felt that this was an opportune time to introduce our Mini Blizzard to all of our loyal customers, and of course people can come in more often and enjoy their favorite Blizzard flavor," Peters says.

But just because the menu item shrinks doesn't mean it will stick around. Despite a Twilight-themed media blitz in 2009, BK Burger Shots have disappeared from the Burger King menu. Officials weren't immediately available for comment as to why.