Risk friendship for a 'maybe' relationship?

By Wendy Atterberry, The Frisky 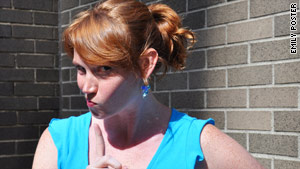 Columnist Wendy Atterberry warns lady she might not get the answer she wants from her "best friend."
STORY HIGHLIGHTS
RELATED TOPICS

We started doing the unofficial dating thing for about four months before I talked to him about making it official, because for all intents and purposes we were BF/GF anyway.

Ben said he wasn't ready for a relationship at that point, and as secretly devastated as I was, I cooled things off in the sex department and remained his friend.

Fast forward to two years later: We're seriously besties, see each other at least twice a week, and text daily. He's very affectionate towards me, and while we sleep in the bed and he's a serious cuddler, we don't have sex. Or kiss.

Though he does say I'm beautiful, and devotes most of his attention to me when we're out, even with his friends. He's taken me camping with his family, and I'm always invited along when his parents come down from Michigan for the weekend to hang out and have dinner. He's a very sweet, quiet, not-really-sexual kinda guy, but I've realized recently that I'm very not over him.

I recently revisited his original profile on the dating site on which we met, and it's still active. On it, he even says that he's been thinking about wanting a serious relationship with someone. Um, hello? What about me? I feel he's sending me mixed messages that I don't know how to read.

While I do want to know how he feels about me, I don't want to jeopardize our friendship. I really can't see myself being friends with him if he started dating some other chick (or if I started dating some other dude, for that matter), but I don't want to give him an ultimatum. I definitely feel like he has feelings for me, but is maybe feeling the way I am? Like he doesn't want to hurt the friendship? I don't know ... any words of wisdom on how I should go about handling this?
-- Friend, or more?

The Frisky: My wedding is making my best friend crazy!

Since Ben has an active dating profile -- one that says he's "thinking about wanting a serious relationship" -- that puts him in the category of looking for someone else. You've got nothing to lose now that you won't eventually lose anyway by telling him how you feel and asking if he's interested in a romantic relationship with you.

But I'll warn you -- be prepared for an answer you don't want to hear. I'm not just suggesting you aren't the woman for Ben -- I'm suggesting Ben may not actually be into women at all.

The Frisky: What if he's not ready for marriage?

Perhaps the mixed messages you've been receiving from him are a result of him feeling a little mixed-up himself. "Thinking about wanting a serious relationship" doesn't exactly sound like someone who's sure of himself.

And the relationship you describe -- "besties" who "cuddle" regularly but don't have sex doesn't sound like the typical relationship between a straight young man and woman.

To put it bluntly: you sound a little like his beard. He brings you camping with his family, invites you to join him for dinner when his parents are in town -- he thinks you're "beautiful" and clearly enjoys your company, but despite sleeping in the same bed as you, never initiates or shows interest in having sex with you. This is behavior typical of someone who's in the closet or confused about his sexuality.

The Frisky: The young hot stuff vs. the older rich guy

Whether he's gay or not, one thing is clear: your relationship needs to be redefined. You can't continue getting the short-end of the stick if what you really want from him isn't available.

If he's not interested in being your boyfriend, decide for yourself whether you can continue being his friend even if it means watching him date other people. Understand that if he is, in fact, gay, it's likely that he himself doesn't realize it or hasn't yet accepted his sexuality.

Being his friend will mean letting him know you love and accept him for who he is, without judgment. If that's something you aren't prepared to offer, or if you can't be in his life without being his romantic partner, there's no reason to continue a friendship with him.

The Frisky: Defining a relationship's status