Living as if they had only one day left 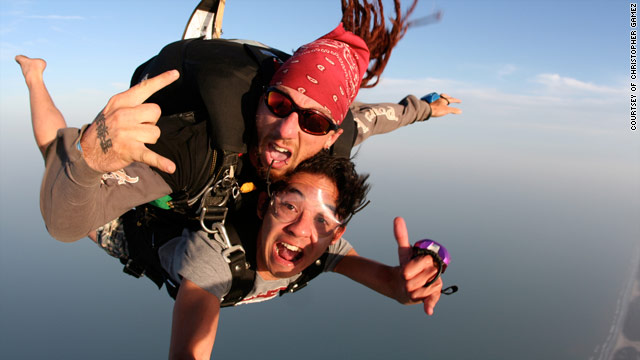 One by one, Gamez watched as three people were "sucked" out of the plane and whipped violently into the thrashing winds and mist. "Just put your head back and breathe," he told himself, seconds before joining the others.

But why would someone with a severe fear of heights willingly plummet from the sky? To cross "skydiving" off his mental bucket list, of course.

Gamez was inspired to dream up his list of goals after watching MTV's "The Buried Life", a reality TV show about four friends who set out to accomplish the tasks on their joint bucket list.

The show, which wrapped its first season in March, has motivated many young adults to create such lists right now, rather than waiting until they're about to "kick the bucket" like Jack Nicholson and Morgan Freeman's terminally ill characters in "The Bucket List" or Queen Latifah's supposedly terminally ill character in "Last Holiday."

Gamez said he tuned in every week, but he knew he wanted to live his own version of "The Buried Life" five minutes in to the first episode.

"If you had one day to live, what would you do?" a voice asks viewers during the show's opening credits. "Would you climb a mountain? Would you kiss the girl of your dreams? Would you tell someone how you feel? Now, if you had a whole lifetime to live, would you lose that drive, or would your list just keep getting longer?"

"[The guys on the show] inspired me and they pushed me to [go skydiving]," he said. "To see them go out with no fear and do the things they wanted to do -- it made me want to do those things, too."

The show's title was inspired by a 19th century Matthew Arnold poem by the same name.

The stars on the show -- Ben, Dave, Duncan and Jonnie -- decided "The Buried Life" summed up their concerns about getting bogged down with daily routine and losing their passion for life.

"What do you want to do before you die?" became the premise for their new lifestyle and, eventually, the MTV series that allowed them to cross Number 53 off their bucket list: "Make a badass TV show."

"What they do and how they do it and who they contact and help -- that's their decision," said Brent Haynes, a senior vice president at MTV, who first realized the project's potential when he saw footage of the guys sneaking into the Video Music Awards to walk the red carpet.

Rather than arresting them, we gave them a TV show, Haynes joked.

"The more I watch 'The Buried Life' and the more I've seen them experience things, the more I've wanted to do it," Megan Fulton said.

The 18-year-old Emory University student said she appreciates what the guys stand for.

In 2008, Fulton's friend died about three days after being diagnosed with an infection. The loss prompted Fulton and her friends to create a bucket list made up of kind gestures, long-term goals, personal achievements and travel destinations.

Some of the items, like pay for someone's groceries and adopt a dog from a shelter, were crossed off rather quickly, she said. But goals like start a flash mob, travel to Lebanon -- from where Fulton and her sister were adopted -- and overcome her crippling stage fright, will be more difficult to accomplish.

"If they can take part in a Krump [dance] competition, I think I can get up and say a few lines in front of people," she said. "They've really helped me and they don't even know it."

One of Fulton's favorite aspects of the show is that every time the cast members cross something off their bucket list, they help a stranger accomplish one of his or her own goals. For example, in the series finale, the guys help a young man who was adopted at birth find his biological father. Because Fulton was adopted, the episode meant a lot to her, she said.

"You can actually care about people and still be cool," Fulton said. "[It's] a good trend to have caught on."

Just one bucket list wasn't enough for 21-year-old Kevin Cheaney. The Michigan State University student wrote two -- one for specific goals he wanted to accomplish during 2010 and one for long-term goals.

Like Fulton, Cheaney was inspired to write a bucket list after his friend died suddenly in a motorcycle accident last summer.

Though Cheaney hasn't yet found the time to be someone's hero, save someone's life or race Germany's legendary Nürburgring track, just writing the lists is an accomplishment, he said.

"A lot of these things, like taking more pictures and visiting old friends, aren't going to be difficult," Cheaney said. "They're just going to improve me as a person and make me appreciate life more and really enjoy it to the max."

Celestine Chua, who has never seen the TV series, came across the bucket list concept while surfing the Internet in 2009.

The 25-year-old from Singapore eventually decided to write her own bucket list, which she shares with the public on her Web site as a reminder to "live every moment to the fullest when you're in good health."

Despite already opening her own school for personal development in Singapore and starting an online talk show, Chua said she thinks No. 14, "experience true love," will be the most challenging goal to accomplish.

"You might think [a bucket list is] just a list of goals, but if you're really thinking about things you want to see, experience and feel before you die, then the whole concept of setting goals is totally different," Chua said. "When we start thinking about what we want to do before we die, our goals become totally different. Fall in love, see the Empire State building. That's the magic of the bucket list -- it removes limits."

Gamez agrees. That's why he's not ending his "buried life" with skydiving, which he said he would do again in a heartbeat, by the way.

Bungee jumping and riding a bull are next.