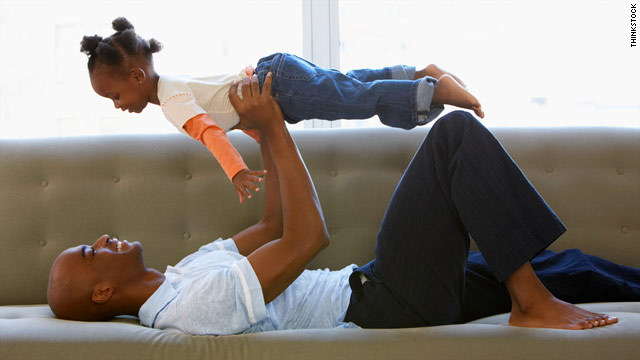 A father becoming more involved with his children is a positive thing for everyone involved, says one expert.
STORY HIGHLIGHTS
RELATED TOPICS

Atlanta, Georgia (CNN) -- Atlanta radio personality Jimmy Baron describes the events that left him unemployed as a perfect storm. In 2006, the radio station where he had worked for 13 years was bought and the new owner cut his pay by 60 percent.

He quit and began looking for work. A few offers came in, but not what he was looking for. Then, the nation's economy tanked, and -- for the next three years -- all the offers dried up.

Baron describes that period as horrendous, emasculating, one of the worst of his life.

Finally, late last year, he got the offer he was looking for as a morning DJ at a rock station in Atlanta. But on his first day back in the workforce, he realized there was a downside to the new job -- he hadn't been in the house when his son woke up, and he missed his old role of Mr. Mom.

While unemployed, Baron and his wife, who worked from home, had been equal caregivers.

"You get to know a child on a completely different level," he said about the hours he spent each day with 3-year-old Micah.

As women's pay has approached -- and sometimes exceeded -- that of men, Mr. Moms lounging at the playground are becoming more common.

Fathers are the primary caregivers for about a quarter of the nation's 11.2 million preschoolers whose mothers work, according to the U.S. Census Bureau.

The Bureau of Labor Statistics reports that 8.6 million men were unemployed in May, 34 percent more than the 6.4 million women. The Great Depression was the last time men's unemployment figures were that much higher than those for women, said Stephanie Coontz, the director of research and public education for the Council on Contemporary Families. The Chicago, Illinois-based organization describes itself as a nonprofit, nonpartisan organization dedicated to providing the press and public with the latest research and best-practice findings about American families.

And during the 1930s, when housework was considered women's work by many, even unemployed men tended to be less involved in homemaking and child care, she said.

But early data suggest that men aren't rejecting homemaking at the same rates in this downturn, she said.

And some men are leaving the work force by choice. An estimated 158,000 married fathers with children younger than 15 left the labor force for at least a year to care for their family while their wives went to work, according to a Census Bureau report based on data from last year.

But a father being at home more -- whether by choice or, like Baron, because he has no alternative -- can be a hard thing for the man as well as the outside world to accept. Neighbors wonder when the man will quit babysitting and get a real job, and teachers still address childrearing concerns to the woman, Coontz said. Finally, women tend to have a hard time viewing their husbands as equals and not just assistants in the home, she said.

"It's because we have had, for 150 years, emphasis on men as experts, as breadwinners, and women as experts on nurturing," Coontz said.

During one of those long afternoons, he vowed that he would help other Mr. Moms when he returned to a job. Recently, he launched monthly "Dads between Gigs" get-togethers for care-giving dads and their children.

"Regardless of how dads end up in the situation of being caregiver, whether they choose it or not, it's still kind of a mom's world taking care of kids all day," Baron said. The events are a good way for men to get their needed guy time, he said.

Coontz said that a father becoming more involved with his children is a positive thing for everyone involved.

"Boys are more empathetic, and girls grow up more confident in their ability to tackle nonstereotype fields, like math or science," Coontz said about children with involved dads.

The best family dynamics develop when a wife and husband share the roles of caregiver and breadwinner, Coontz said. Partners who share responsibilities tend to have more stable marriages than do parents who play exclusive roles, she said.

It's healthy for both partners to have a life in and out of the house, and it's good for the children to see that as well, she said.

Coontz said men may want to consider another incentive in deciding whether to lend a hand with the laundry: Women tend to feel more intimate when their partners are involved with childcare and housework.