Not getting hired? 10 reasons why 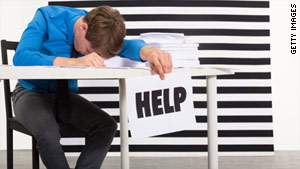 Interview mistakes may be holding you back from getting the job you want.
STORY HIGHLIGHTS

(CareerBuilder) -- You don't understand. You updated your résumé, you're applying to jobs every day, you've cleaned up your digital dirt and you network every day.

Yet here you still are on the unemployment list. What is wrong with employers?

Unfortunately, many job seekers don't stop to consider that the problem might not be employers but themselves.

It's a hard concept that most job seekers have trouble wrapping their heads around, but applicants frequently (and inadvertently) display signs that tell an employer that they're not the best fit for the job.

According to a 2009 CareerBuilder survey, 47 percent of employers said that finding qualified applicants is their biggest hiring challenge. When asked to identify the most valuable characteristics in new hires, employers cited multitasking, initiative and creative problem-solving.

Do you lack what employers want? Yes, there are fewer jobs and there is more competition, but are you doing everything you can?

Here are 10 reasons why employers might have passed you by.

Any lies you tell in your job search, whether on your résumé or in an interview, will come back to haunt you. In a 2008 CareerBuilder survey, 49 percent of hiring managers reported they caught a candidate lying on his or her résumé; of those employers, 57 percent said they automatically dismissed the applicant.

Everything you tell an employer can be discovered, so it behooves you to be honest from the get-go. If you're concerned about something in your past, invention is not the answer. Use your cover letter to tell your story, focusing on your strengths and accomplishments and explaining any areas of concern if needed.

2. You have a potty mouth

It's certainly tempting to tell anyone who will listen how big of a (insert expletive here) your current boss is, but a hiring manager for a new job is not that person. A 2009 CareerBuilder survey showed that 44 percent of employers said that talking negatively about current or previous employers was one of the most detrimental mistakes a candidate can make.

Find a way to turn those negative things job into positives. If you can't get along with your co-workers, for example, tell the prospective employer that you're looking for a work environment where you feel like you're part of a team and your current position doesn't allow for that kind of atmosphere.

Employers want people in their organization to work their way up, so it's best to show that you want to and can grow with the company. If you were asked where you see yourself in five years and you gave an answer that wasn't related to the position or company you're interviewing with, kiss your chances goodbye.

Ask questions like, "What type of career movement do you envision for the most successful candidate in this role?" It shows that you have envisioned your future at the company.

4. You have serious digital dirt

Make sure to remove any photos, content or links that can work against you in an employer's eyes.

In two separate 2009 CareerBuilder surveys, 58 percent of employers said that coming to the interview with no knowledge of the company was a turnoff, and 49 percent said that not asking good questions cost candidates a job offer. Plain and simple, do your homework before an interview.

Explore the company online, prepare answers to questions and have someone give you a mock interview. The more prepared you are, the more employers will take you seriously.

6. You acted bored, cocky or disinterested

A little enthusiasm never hurt anyone, especially when it comes to a potential new job. Forty-five percent of employers in a 2009 CareerBuilder survey said that the biggest mistake candidates made in the interview was appearing disinterested and 42 percent said appearing arrogant cost applicants the job.

Every business wants to put their most enthusiastic people forward with important clients and customers, so acting the opposite will get you nowhere.

7. You were a little too personal

Video: Job hunt: How to stand out

Seventeen percent of employers said that candidates who provided too much personal information in the interview essentially blew their chances at the job, according to a 2009 CareerBuilder survey. Not only does personal information offend some people, but anytime you talk about topics such as your hobbies, race, age or religion, you're setting yourself up for bias.

Though it's illegal for employers to discriminate against applicants because of any of these factors, some will do so, regardless.

8. You were all dollars, no sense

As a general rule of thumb, you should never bring up salary before the employer does. Doing so is tacky and makes the employer think that you care about the money involved, not about helping the employer succeed.

If the topic does arise, however, be honest about your salary history. Employers can verify your salary in a matter of minutes these days, so lying only makes you look bad.

Hiring managers want people who can prove that they will increase the organization's revenues, decrease its costs or help it succeed in some way. If all you give to an employer is a bunch of empty words about your accomplishments, you don't demonstrate how you can help the company.

In fact, 35 percent of employers said that the most detrimental mistake candidates make is not providing specific examples in the interview. The more you can quantify your work, the better.

10. You don't have enough experience

Managers don't have as much time as they used to to train and mentor new employees. The more experience you have, the more likely you are to hit the ground running without a lot of hand-holding.

The best way to show that you know what you're doing is to give the employer concrete examples of your experience in a given job duty.