What we do when the boss isn't looking 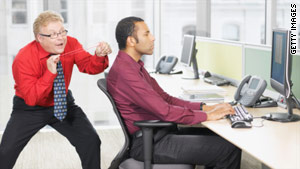 (CareerBuilder.com) -- "When the cat's away, the mice will play," is a term most people can relate to. When the manager is gone -- be it on vacation or just away from her desk -- some employees act like a teenager whose parents are out of town.

They sneak out early or come in late. They chitchat with co-workers more frequently, usually about nonwork-related things. They make personal phone calls, take extra-long lunches -- heck, maybe they'll even enjoy a cocktail with their meal.

Many employees do it -- but why?

"The answer is simple: It's a direct reflection of the boss's leadership. When a workplace isn't compelling to people -- where employees lack the desire and ability to be accountable for their own success -- misbehaving or slacking in the boss's absence is merely a mask for boredom. It's also important feedback for the boss: "Raise your game," says Linda Galindo, a consultant specializing in individual and leadership accountability and the author of "The 85% Solution: How Personal Accountability Guarantees Success."

We asked employees what they do when the boss isn't looking. They had some very entertaining stories:

"At the time I was an assistant manager at Publix Supermarkets of Florida. Not content with the absolute misery of the hourly employees I was responsible for, I tried to inspire and entertain them. It worked; those under me had the highest productivity rate, got the best raises, were promoted faster and would do just about anything in the world for me because they knew I would do anything in my power for them. While this usually meant me working alongside them or personally training them for continuous quality improvements, it occasionally took on a slightly wilder side. Riding a motorcycle through the store aisles after closing, bowling for two-liter soda bottles with frozen turkeys, baseball in the stockroom, laser tag on the roof, contests to see who could catch the most shoplifters, hide and seek, a chess tournament, foot races, pizza parties, karate training, book club and a few hundred practical jokes."
-- J.Olson

"I've been building my life-coaching business for over a year while I've held down an executive assistant job from 9-6, Monday through Friday. The boss works across the street from the office that I'm at, and I spend the majority of my day (at least four hours, maybe more) building my coaching business -- posting to my blog, tweeting, communicating with clients, writing newsletters, even doing sessions during my lunch -- break -- you name it!. Thankfully it's paid -- off -- I'm giving notice in about a month to coach full-time."
-- M.W.

"When I worked at this pizza shop, myself and two fellow employees would try to make each other laugh by making faces behind the boss. For example, I would be running the oven and the boss would be right next to me, so if I laughed I was screwed. So my friend X would be at the cook line, about 2 feet behind my boss so I can see him and the boss couldn't. And the facial expressions and motions he would make were hilarious. I must say I never [saw] him get caught."
-- M.W.

"[My] story has more to do with a colleague who always has some very important thing to do at home/with the baby/his elderly mother-in-law, or has a sudden urgent need to deliver something to one of our member organizations that takes him out of the office for long stretches of time when the executive director is away. Recently, when the boss went on an extended holiday around Christmas/New Years, I and another colleague kept a spreadsheet of this slacker's arrivals, lunch breaks and departures, and then averaged out the numbers. All told, he was in the office an average of 5.5 hours a day while the boss was away. And, given all the adorable postings I see on Facebook from him every night, I imagine there's at least another hour in there taken up in Facebook upkeep and Web browsing."
-- D.C.

"To be honest, before I became a boss and I worked for someone else, I did some of everything when the boss was a way. From surfing the Internet to making personal calls and paying bills [to] taking an extra hour at lunch [to] going home early to sleep. I've even made out with a woman or two at the office."
-- J.D.

"I know what one of my employees was doing when I was out of the office or at meetings. She was on Facebook! A few vendors told me about it privately, so I set out to bust her in the act. I invited her to become my Facebook friend, and she took the bait. Then, I wrote her up and attached the summary of the days and times she was commenting on her Facebook page, which was during business hours, while I was away. I don't particularly like writing up employees, but I loved this write up with the Facebook evidence attached!"
-- K.P.W

"When our bosses aren't looking or even better when they walk away and leave their computers unlocked, someone sneaks in and sends a short e-mail to someone else in the office. These e-mails range from the quirky to the flirtatious to the potentially insulting, but they are always good for a laugh. At least as long as the boss still isn't looking."
--T.D.

"For the past two years I've been self-employed, but before I started my company I always enjoyed reading news articles on the Internet during the day. My project managers often frowned upon us surfing the Internet during the day, but I found a creative way around this. At the beginning of the day I'd find interesting articles online and copy and paste the text into a word document. The word document had the company logo in the header, so if somebody walked by my cube it would appear that I was reading an official work-related document rather than the top sports news of the day."
-- S.M.

"I have a co-worker who is two completely different people when our boss is out of the office. When she is in, he makes sure to get to work before her and leave after her, even though he is just messing around on Skype and YouTube all day long. She took a one-week vacation in August, and he worked 9-5 every day (our hours are 8:00 to 6:30). Then, he put the icing on the cake in the week after Christmas. Most of our team was out of town, including our boss. Apparently he thought he was going to be the only one in the office, and didn't even come in to work. He'd occasionally send out an email to make it seem like he was there. Finally, on the Wednesday after Christmas, he strolled in around 11:00 am. When he saw another team member was here, he turned beet red, and stammered how he thought she was out for the week. No one has said anything to our boss yet, but we are dying to."
--J.J.

"I placed an online order to American Apparel to restock my underwear supply. Instead of shipping them to my house, I had them shipped to the office -- more reliable. When the package arrived, I couldn't wait to see what the panties looked like ON. Literally, I couldn't wait. I didn't even take time to close my office door. I pulled out the first pair (light blue thong), lifted up my skirt, and pulled the panties over my leggings. They were cute! Unfortunately, just at that moment my boss arrived at my door -- a 60-year-old man face to face with a 28-year-old female employee. It wasn't good. Next time I'll wait until he's out of the office to try on my undies."
-- K.H.