NHL player 'incredible for his age' 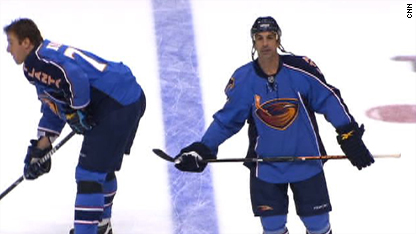 Atlanta, Georgia (CNN) -- The only checks Chris Chelios should be concerned about are the ones he's writing for his children's college tuition, but instead he still has the next body check into the hockey boards on his mind.

At 48 years old, Chelios is the oldest American and second oldest player ever to play professional hockey.

The veteran of 26 seasons in the National Hockey League has won the Stanley Cup three times, once in Montreal, Quebec, and twice in Detroit, Michigan. Now, the Chicago, Illinois, native has been called up from the American Hockey League's Chicago Wolves to the NHL's Atlanta Thrashers.

"Hopefully I can provide a little bit of leadership with what I bring to the table," Chelios said. "It is a black cloud over my head -- that 48," he said. "I got to go out on the ice and prove it."

Chelios is 30 years older than his youngest teammate, Evander Kane. Six of his teammates weren't born when his NHL career began. Still, cracks about age don't come up in the locker room.

"Most of the guys from my team have been pretty respectful that way, but I'm so used to hearing it from the fans and from other teams that it doesn't bother me," the defenseman said.

Teammate Ron Hainsey said the jokes are minimal. "You probably won't hear too many from these guys because he might start skating circles around guys here."

Hainsey, like most of the Atlanta Thrashers, grew up watching Chelios play. "He's in as good of shape as anybody here," Hainsey said. "It's just simply incredible for his age."

In his 9th NHL season, Hainsey has played in about 600 professional hockey games compared to Chelios' 1,600 professional games. "If there's anybody who's seen just about everything, he's got to be the guy who's it," Hainsey said. "We're going to soak up everything we can from him while he's here."

Chelios still plays hard, but he doesn't play as many minutes as he did in his 20s. When he is on the ice, Hainsey said, Chelios seems to always be in the right place at the right time. "I think I'm a little smarter than the young guys, but they got their speed that makes up for the lack of smarts," Chelios said.

Thrashers Head Coach John Anderson is just five years older than Chelios. "He loves the game. He loves to play and it's not about the money anymore. It's about wanting to win and wanting to play," Anderson said.

"I was kidding our defense coach [Todd] Nelson," Anderson said. "I said this is probably the last time in your whole career you're going to get to coach somebody older than you."

Chelios is married with four kids who live in the Detroit area. He has two daughters in high school, one son in college and another son heading to college soon. "It's been a pretty tough adjustment for me not being with them," Chelios said.

Both of his sons play hockey. "You know at some point I got to start watching them," he said. "They're sick of watching me."

Chelios is four years away from reaching Gordie Howe's record of playing in the NHL at age 52, but says he won't break that record. "He can have the record. He's the greatest ever," Chelios said. "The fact that I've made it this far as an American, that says enough and I feel pretty good about that."

While he looks at his time with the Thrashers as being his last shot at the NHL, he won't close the door on the possibility of another season. "I think depending on what happens now, realistically, this could be it," he said.

"Who knows what could happen? We get on a roll, things start going good, maybe I'll get that urge to come back again."