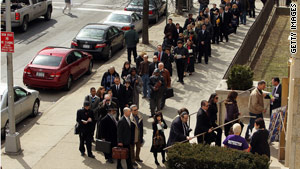 That's the grim scenario lurking in the minds of a growing number of American workers whose anxieties are driving a curious trend, workplace experts say.

Companies are offering employees more chances than ever to work at home or outside their office through "flex time." But fewer workers are accepting the offers for a more convenient schedule, according to several work-life experts.

The reason is simple: fear, says Sylvia Ann Hewlett, president of the Center for Work-Life Policy. a New York-based company that promotes flexible schedules for workers.

Most employees feel there is more pressure than usual to be in the office, Hewlett says. "They feel as if that jacket needs to be on the back of their office chair at 8 at night because everyone is trying to prove that they're indispensable."

Blame it on the recession, Hewlett and other workplace experts say. Flex-time employees, those who work alternate schedules that included working at home or around their children's school hours, have become more skittish, they say.

Hewlett says there was a significant decrease between summer 2008 and January 2009 in the number of professionals who felt comfortable working from home for a company. That was at the height of the latest recession, she says.

That jacket needs to be on the back of the office chair at 8 at night because everyone is trying to prove that they're indispensable.
--Sylvia Ann Hewlett, president of the Center for Work-Life Policy

Yet Hewlett and others say that workers who routinely work long hours and turn down offers of flex time could end up hurting themselves and their companies.

It's hard to make that argument stick because so many workers believe that more workplace visibility equals more job security, says Jennifer Kalita, author of "The Home Office Parent: How to Raise Kids & Profits under One Roof."

"People do business with people they like," Kalita says. "It's easier to like people whom you see on a daily basis, because you are 'in it together.' This is the space where relationships and loyalty grow."

Those who work outside the workplace often feel as if they're not growing, Kalita says. Stay-at-home workers often work longer hours than their on-site counterparts, but some are not sure their colleagues know.

"While most telecommuters I know would love a cleaning crew to force them out of their offices by 7 p.m., some abandon the concept to prove to their coworkers and superiors alike that they are, in fact, working," Kalita says.

It can all seem noble on the surface: Turn down the flex time, put in the long hours to show your colleagues that you're pulling your weight. But it can backfire, others say.

Jane Goldner, a hiring expert and CEO of the Goldner Group, says fear of losing one's job only motivates people for a short time.

"We can burn the midnight oil to a certain point, and then we're exhausted, and we're not productive," Goldner says. "Fear does that to people."

That fear bleeds into workers' personal lives, she says. Some workers not only spurn offers of flex time, but they forgo personal tasks such as doctor appointments or household errands because they're afraid of being laid off.

Companies that exploit those workers' fears get higher productivity in the short term, but they eventually lose, Goldner says. When the economy improves, those same employees will jettison those companies for a more humane working environment.

"Those companies will have a revolving door," Goldner says.

There is, however, a way for workers to grab more flex time yet earn more workplace respect if they remember one rule, says another workplace expert.

"It is not you that your boss needs to see; it's your impact," says Karissa Thacker, an industrial psychologist and executive coach.

People who feel compelled to work long hours at a particular job site are being driven by an "Industrial Age mentality," Thacker says. They think that job security is dependent on physical presence.

A worker's value is measured by "visible, observable impact on a daily basis, digitally or in person," Thacker says.

Job security is not dependent on sitting in an office chair for long hours, Thacker says.

"Some of the most unproductive people are at the office by 7 a.m.," she says.

Some big companies have already made that discovery, says Hewlett.

She says that even as more workers shun flex time, more big companies are offering it because it also helps their bottom line.

The accounting firm KPMG, for example, decided it had to cut the payroll in its British branch by 15 percent last winter, she says. Instead of firing people, KPMG offered 11,000 workers flex-time choices that ranged from a four-day workweek, a mini-sabbatical and reduced pay, Hewlett says.

"They found that 80 percent of the workers went for flex time," Hewlett says. "They were overjoyed to get a little bit of their life back. They saw it as a shot to grab some time with family."

Why some consider flex time a no-brainer

KPMG succeeded in saving 15 percent of its payroll costs by offering its employees flex time, she says.

"Generally speaking, offering flex is a no-brainer," Hewlett says. "There's a lot of evidence that it boosts productivity and it doesn't cost anything."

At least one person who still takes flex time says it has paid off, even though she did it in the middle of a recession.

Jennifer Clarin, a publicist based in Miami, Florida, first asked for flex time three years ago when her daughter, Orli, was born. Her company granted her request, but Clarin says she's aware of how some people view flex time.

"When they hear flex time and you're working at home," she says, "they think someone is just watching TV all day and going to lunch with friends."

But Clarin says she actually works harder at home. There's no draining commute, and she makes sure she's available for nights and weekends as a gesture of gratitude to her company, Boardroom Communications.

"You can be more productive because you don't have a lot of distractions," she says of working at home. "But I think that you have to be willing to give them a little more for them to give you a little more."

What's more important, she says, is that she doesn't have to have her coat draped on her office chair each evening to prove her worth.

"I've had the advantage of being there eight years," Clarin says of her job. "They know who I am, and they know what I do. They don't question if I'm working."