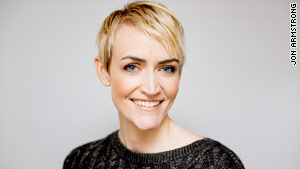 Mommy blogger Heather Armstrong explains how flexible work policies might have helped when she was suicidal.
STORY HIGHLIGHTS
RELATED TOPICS

(CNN) -- Heather Armstrong, the woman behind the popular blog Dooce, understands how important flexible working policies can be for employees and their families.

"For the first six months, I often thought of suicide every day," Armstrong remembered.

She said her husband, Jon's, company was in the middle of a software project, and he was reprimanded if he called in sick.

"So, here he is going to work, working on this project and knowing that his wife is at home thinking about killing herself. And he can't even take a sick day," she said.

She eventually checked herself into a hospital, and her husband stayed home using the Family Medical Leave Act.

Armstrong and her husband now work at home, running Dooce.com.

She was invited to a White House Forum on Workplace Flexibility on Wednesday by a Department of Labor staffer who told her that many people in his office read her blog.

Armstrong said she brought a small-business owner's perspective to the conference.

"It was mostly about flex policy, telecommuting and determining your own hours," she said of the small group discussions. "The emphasis was definitely on technology and infrastructure to make it possible for people to work at home -- make up hours at home -- because of family emergencies."

Some workers afraid to use flex time

Armstrong had a seat in the front row as both President Obama and first lady Michelle Obama spoke to the group. And although she had voted for the president, it was his wife who made the greatest impression.

"I was not prepared to be that stunned," Armstrong said, adding, "It was her presence."

The first lady shared her own struggles with balancing work with children and a busy husband. She told how she was on maternity leave with daughter Sasha when she was called in for a job interview but couldn't find a babysitter.

"I packed up that little infant, and I put her in the stroller, and I brought her with me. And I prayed that her presence wouldn't be an automatic disqualifier," Michelle Obama recalled. "And it was fortunate for me that, number one, she slept through the entire interview."

The first lady got the job and felt lucky her interviewer had just had a new child and was understanding. But she said she realizes that most workers struggle to balance families with work, with no flexible working arrangements and often without sick leave.

The White House said it is trying out a pilot program to help government workers "meet the demands of the job without sacrificing their families."

Armstrong says the majority of her readers are supportive of such efforts.

"All of us want to see better laws enacted, especially when it comes to families. And especially when we in the 21st century have lost our village, and if a kid gets sick, you can't expect the person sitting next to you in the hut to take of the kid."

Armstrong says some people in the online community think she makes a "big exorbitant amount of money" and believe that her success has made her unable to understand the plight of average families.

She says that is wrong and that she "owns every perspective at this table."

"I started [her blog] in my mom's basement, completely broke," she said.

Now that she and her husband can support themselves with their own Web site, they try to "make it so that our employees feel valued and have a flexible working environment."