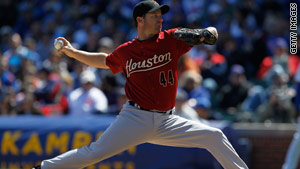 After Roy Oswalt helped the Houston Astros get to the 2005 World Series, he was given a bulldozer.
STORY HIGHLIGHTS
RELATED TOPICS

(Mental Floss) -- With baseball season in full swing, here's a list of some of the more creative, generous or ludicrous perks players have received.

Hey, New York Mets fans, think things couldn't get any worse? Next year former outfielder Bobby Bonilla goes back on the payroll at the ripe old age of 48.

In 1999, Bonilla returned to the Mets for a second stint at Shea following his borderline disastrous free-agent signing in 1992. Bonilla wasn't any better the second time around, so the Mets waived him in 2000. The problem was that the team still owed Bonilla $5.9 million in guaranteed salary.

Former A's owner Charlie Finley never thought of a gimmick he wouldn't try, including a mechanical rabbit that delivered fresh balls to the umpire and hiring a 13-year-old MC Hammer as his "Executive V.P."

The A's went on to win the World Series that season, and Fingers' contract for 1973 contained a $300 bonus for growing the mustache as well as $100 for the purchase of mustache wax.

After a spectacular rookie season in 1986, rotund reliever Charlie Kerfeld, who always pitched in his lucky Jetsons T-shirt, needed a new contract. Kerfeld asked for $110,037.37, matching his No. 37 jersey, to pitch in 1987. On top of that, he received 37 boxes of orange Jell-O in the deal.

The Astros would soon regret this delicious bonus, though; Kerfeld, who was famously caught eating ribs in the dugout that season, would battle weight and injury problems and get sent down to the minors.

The Boston Red Sox made a big free-agent splash this winter by signing starting pitcher John Lackey to a five-year, $82.5 million deal.

Signing pitchers to long-term contracts is a tricky venture due to the possibility of injury, but the Red Sox managed to give themselves a little peace of mind.

If Lackey misses any significant time due to surgery on a pre-existing elbow injury during the first five years of the contract, the Red Sox gain a club option for the 2015 season in which Lackey would have to pitch for the major league minimum salary.

The contract extension George Brett signed with the Kansas City Royals in 1984 must have been one of the stranger deals in MLB history. The club agreed to give Brett the bat he used in the infamous 1983 "Pine Tar Game" as part of the pact, but that wasn't the only odd perk. The contract also gave him part ownership of an apartment complex in Memphis.

At the time, Avron Fogelman co-owned the Royals. Fogelman had made his fortune as a lawyer and real estate baron in Memphis, so when the team needed a little extra incentive to get Brett to sign, they offered the third baseman a piece of one of Fogelman's developments.

Brett's agent/brother Bobby negotiated the deal; he referred to the 1,100-apartment complex as "a nice little kicker." Brett received a guaranteed cash flow of $1 million from the development and retained the right to sell his 10 percent stake to the Royals for $2 million.

Fogelman's Royals used the trick a couple more times when they signed reliever Dan Quisenberry and outfielder Willie Wilson to similar deals that gave them stakes in the 700-apartment Stewart's Ferry development in Nashville. (Quiz got 24.5 percent of the development, while Wilson got 9.5 percent.)

Fogelman later told the New York Times that he might have given up too much in the hastily negotiated deals.

6. Barry Bonds gets a legal deal

All player contracts are full of legal jargon, but Barry Bonds' 2007 deal with the San Francisco Giants contained a different kind of legalese.

In the wake of Bonds' ongoing problems with the law, the club negotiated a deal that would allow the Giants to release Bonds or convert his contract to a non-guaranteed deal if he came under indictment for a crime.

Moreover, the club contractually severed its relationship with Bonds' personal trainers and wrote in the deal that said trainers were no longer allowed in team facilities.

Before pitcher Roy Oswalt made a start in the 2005 National League Championship Series, Astros owner Drayton McLane promised to make the ace's dreams come true if he won, specifically his life goal of bulldozer ownership.

After Oswalt dominated the Cardinals to send Houston to its first World Series, McLane came through with a Caterpillar D6N XL.

Since Major League Baseball requires high-dollar gifts be disclosed, Oswalt signed an addendum to his contract, a "bulldozer clause," authorizing the club to give him his new toy.

Dice-K's deal with the Red Sox includes a plethora of strange or excessive clauses including housing allowances and a personal masseuse, but the oddest is that he's contractually guaranteed the jersey number 18.

One would think a guy making a guaranteed $17 million a year wouldn't be too worried about keeping a roof over his head. Not Ichiro Suzuki, though.

The Seattle Mariners star outfielder signed a five-year contract extension in July 2007 that included, among other perks, four round-trip airline tickets to Japan each year and the services of an interpreter and trainer throughout the season. It also included a housing allowance for each year of the deal.

While the numbers themselves aren't eye-popping -- the allowance ranges from $32,000 to $36,000 a year over the life of the deal -- kudos to Ichiro for getting someone else to pay his rent.

Mental Floss: Where are kids from Sports Illustrated covers?

By the end of his storied career, outspoken hurler Curt Schilling had started to get a bit doughy.

When the Boston Red Sox re-signed him to a one-year deal for $8 million before the 2008 season, it included a clause in which Schilling could pick up an extra $2 million if he made weight at six random weigh-ins over the course of the season.

Schilling picked up a $333,333 check each time he didn't tip the scales too far.

Mets outfielder Carlos Beltran's mammoth seven-year, $119 million deal from January 2005 showed that he had all of baseball's five tools but lacked a conditioned ocular enhancer: a gadget that throws numbered, colored tennis balls over 150 mph to help players pick up the speed of a pitched ball.

There's a clause in the contract requiring that the Mets lease the machine and retain an operator for it.

Lots of players have free-plane-ticket perks written into their contracts, but some feel that air travel really lacks that we're-going-to-the-prom feeling you can only get from a long limo ride.

When current Yankees flamethrower A.J. Burnett signed with Toronto as a free agent in December 2005, he required that his wife receive eight round-trip limo rides from his home in Maryland to Toronto each season.

That's around nine hours in a limo each way, which is enough time to move the little divider between you and the driver up and down roughly 3,500 times.

13. Michael Jordan pulls in cash in the minors

This last one's actually a basketball contract. Michael Jordan's abrupt departure from basketball to play minor league baseball following the Chicago Bulls' 1993 championship campaign struck a number of observers as odd. How could Jordan quit playing hoops and leave all of that money on the table?

As it turns out, "His Airness" was losing less cash than we all thought. Bulls owner Jerry Reinsdorf also owned the Chicago White Sox, the team Jordan was playing for in the minors.

Even though Jordan was technically retired from basketball, Reinsdorf paid Jordan his $4 million salaries for the Bulls seasons he missed.