By Deborah A. Bailey, CareerBuilder.com 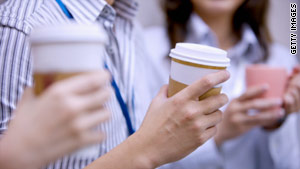 Don't choose sides or be influenced by what you may hear during coffee breaks.
STORY HIGHLIGHTS
RELATED TOPICS

(CareerBuilder.com) -- Things are tough enough with so many unemployed people and others trying to hold on to what they've got, but what happens when your workplace is driving you crazy?

Going to work each day and dealing with negativity can put you on the edge and keep you stressed out.

Often, employees and managers will bring their own anxieties into the workplace with them. People are increasingly being asked to do more with fewer resources. There's pressure to perform or else become another pink-slip statistic.

So what can you do to stay sane while the people around you are losing their minds?

Don't buy into the negativity

Though the people around you may be stressed and resentful, it doesn't mean that you have to participate. Sure, it can be hard to focus on your job when you have to interact with surly co-workers. It's tempting to deal with the stress by reacting in kind, but when you fight fire with fire, you become part of the problem.

Instead of reacting, wait a moment and evaluate the situation. Trying to match someone's negative tone or attitude will just lead to things going out of control. This is often how negative workplaces become downright toxic. One person reacts to someone else's behavior, then others take sides and still others speculate about the situation. Once that happens, everyone is stuck in the drama and the environment and productivity suffer.

Give yourself a break

Negative workplaces can be draining and debilitating. If you find yourself getting sick more often, that's a sign that your work environment is wearing you down.

Align yourself with others who aren't part of the negativity. Also, make sure to set aside time to take breaks, so that you can get out of the office for a while, if possible. Even getting out for a little while will make a big difference. If there's pressure to work longer hours, set boundaries so that you can maintain a life outside of work.

Stay away from office politics

You do have a choice as to whether you'll participate in the office gossip and backstabbing. Once you get involved in the various factions and the "us against them" mentality, it will be difficult to get free. The best thing to do is stay focused on your work.

For example, if you have to attend social events or meetings where the politics are in play, stay as professional as possible. Don't choose sides or be influenced by what you may hear during coffee breaks. It's your job to manage your career and get your job done, not to be caught up in power struggles.

In the end, it may mean that you get left out of some circles because you're not joining in the blaming and complaining, but you will be much better off. And when the balance of power shifts, as it usually does, you won't be in the line of fire because you were on the "wrong" side.

Consider if it may be time to move on

If the atmosphere is unbearable, you may have to consider moving to another department or even going to another company. There are some cases where no matter how hard you try, you'll be pulled into someone's issues.

If you find yourself playing more politics than doing any meaningful work, it might be time to look into other options. Before you make that decision, however, do as much research as you can about your next job. You don't want to end up running from one situation into another one that's just as uncomfortable.

Stay focused on your long-term career goals. You'll be in a better position to get through the rough spots and not be caught up in the anger and resentment that some of your co-workers may be experiencing.

Deborah A. Bailey is the author of "Think Like an Entrepreneur: Transforming Your Career and Taking Charge of Your Life."