Are we joyless working machines? 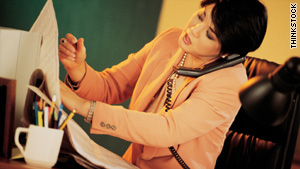 People are working too much and not experiencing the joys of being alive, one author says.
STORY HIGHLIGHTS

(CNN) -- It was like Mary Pipher was on a runaway train of success. She had multiple best-selling books and was much in demand as a therapist and an inspirational speaker. And at one point in 2002, she felt like she had given all she could give, and she suffered a meltdown.

She detailed the struggles in her life and her recovery in her latest book, "Seeking Peace: Chronicles of the Worst Buddhist in the World." And in the wake of that book, she is sounding an alarm about danger of being a joyless "constant working machine."

"If you ask anyone how they've been any more, they always say, 'busy,' " Pipher said. "I'm just stubborn enough that sometimes I say, 'You know, it's been really slow for me lately,' just to see people's shocked looks, because nobody in America ever says that anymore."

Pipher, the author of "Reviving Ophelia," an acclaimed book that examined the stresses and perils young girls face, took some time off to heal herself by just sitting and enjoying simple things like birdwatching and viewing sunsets.

Now that she has slowed down, she's noticed how so many adults are living at a fast pace despite their feelings of being burdened, anxious and confused.

She also fears that her too-busy country has developed what she calls "a culture of anhedonia," or the lack of ability to feel pleasure and joy.

"People just are not laughing as much," Pipher said, adding that she rarely hears anyone walking around singing or whistling, like she did growing up.

The psychologist says many people fault themselves for being too busy and think they just have to grab more control of their lives.

Women put too many expectations on themselves: having a career, being physically fit, being in good relationships with family and friends, reading good literature, doing community work, recycling and buying green, and being involved in some sort of spiritual quest.

And when they fail to accomplish all that in one day, she said, "they go to sleep thinking, 'I didn't get done what I needed to, and somehow that is my fault.' "

Men are also heading down the path of feeling like a failure, as more of them share the "second shift" work of child care, cooking and cleaning at home. But the workplace hasn't shifted much to accommodate men who are more involved in their families, Pipher says.

People's efforts to squeeze so much more work into the unchanging number of hours in a day has caused them to abandon the mammalian rhythms that "we've operated on since the beginning of the human race."

Breaking those natural rhythms, Pipher says, leads people to avoid eye contact as they tell themselves it might distract them from the busy and important work that they've got to rush to do. Also, moving too fast makes it difficult to see anything that isn't moving at the same speed, again leading to people not seeing each other.

"That's got to be some kind of enormous human tragedy on a cultural level," she noted. "Our time famine is actually diminishing the quality of the human experience in a very serious way."

Our too-frenetic lives also dulls our senses, she says, leading us to "lose all capacity for joy, because joy comes from actually appreciating and being in the senses and being in the body."

Pipher realizes that most people don't have the ability or the money to take an extended leave, like she did for about three months. But she says there are other ways they can slow down.

The author says she has become a "seeker of moments": those times when you stop in your tracks and really pay attention to something beautiful or feel a connection to another person.

She suggests ways others can capture such moments:

• Take part in any daily practice that allows for stillness and quiet, such as meditation, sitting and drinking a cup of tea, stopping to watch a sunset or just lying in bed and being aware of your breathing for five minutes every morning before getting up.

• Make a gratitude list at the end of the day to remind you where there was joy, or something spontaneous or fun during the day.

• Choose to make human connections by looking directly into the eyes of the barista taking your latte order, your coworker or your child's teacher or day care provider.

• Set aside an area in your home -- a room or even a chair -- that is the quiet or calm spot. And any member of the family can go there and be undisturbed while they "deal with their own inner architecture for a little while."

• Turn off machines and live as close as possible to olden times by walking, talking or cooking with others.

• Interact with pets. "Dogs and cats move at the same speed in 2010 as they did in 1910," so there is a calmness in being with them, and they don't care if you're a high achiever or successful or well-paid.