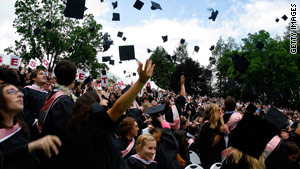 Graduates most likely to find a job had majors like accounting, business, computer science and engineering.
STORY HIGHLIGHTS
RELATED TOPICS

(CNN) -- Desmond Brooks had hoped to major in hospitality and considered attending an out-of-state college. Instead, he's living at home, enrolled at Georgia State University and working full-time for campus security.

He abandoned hospitality. Instead he's majoring in business to learn the machinations of the market. This way, he'll be able to help his father run his robot repair business that, like many small businesses, is overcoming a downsize.

Chris Singh, a junior majoring in finance and managerial science at GSU, plans to delay graduate school to find work and pay off student loans. In a different economy he'd start grad school right away, he said.

In the wake of the recession, the American college experience has decidedly become more career-driven. Students are reconsidering majors or exploring employment options long before they see a diploma.

More 2010 graduates have work waiting for them when they graduate than 2009 graduates, but not because they received more job offers.

Read hot job spots for the next decade

Last year, 40 percent of seniors who applied for jobs received an offer and only 45 percent accepted them, according to a National Association of Colleges and Employers survey.

This year, 39 percent of seniors reported receiving a job offers, roughly the same percentage as the class of 2009, but 59 percent accepted.

The classes of 2009 saw graduates from previous years turn down jobs and quickly get better offers in terms of location and pay, said Ed Koc, director of Strategic and Foundation Research for NACE. Often, that better offer never materialized for last year's class.

Almost one out of four 2010 graduates who applied for jobs have one waiting for them, a 4.4 percent increase from 2009's class statistics.

Those who were most likely to land a job pursued career-driven majors like accounting, business administration, computer science, engineering, and mathematics, according to the NACE survey.

Singh took that into consideration when deciding his major.

"Finance is robust," he said. "It's not recession-proof, but it's strong."

Engineering disciplines account for eight of the 10 most highly paid degrees this year, surveys have shown. Engineering premiered on the annual list of most popular majors compiled by the Princeton Review this year.

Communications has slipped since the onset of the recession in 2007. But surprisingly, some degrees that are not in demand remain popular among students.

More graduates planned to work for a non-profit or teach, or attend graduate or professional school in 2010 than 2009, according to NACE.

Georgia State psychology major Lyle Brittain said he plans to join the military after graduating to put off joining the workforce.

"My plans haven't changed," he said, "Just the outlook."

Students are also opting for service learning programs -- such as freshman seminars or internships -- earlier in their college careers and more extensively, said Rob Franek, senior vice president of publishing for the Princeton Review.

"Rising juniors and seniors (in high school) are looking for a return on investment that will get them a good career and higher education," Franek said.

Brooks, a freshman, said he is working with two others within the international business department to learn better management techniques.

"Hopefully I can have an internship next semester," said Brooks, whose schedule seems packed already.

He said job seekers have to be realistic about their career goals and stay geographically flexible. His advice to college students: stay optimistic and work hard.

"Don't be overwhelmed by the economic problems, Wallace said. "These things are cyclical. It's going to happen multiple times in your life."