Tiger, you owe me nothing 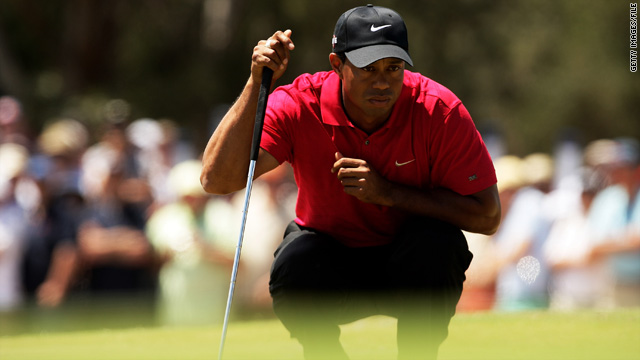 Roland Martin says Tiger Woods should be accountable to the public only for what he does as a golfer, not in his private life.
STORY HIGHLIGHTS
RELATED TOPICS

Editor's note: Roland S. Martin, a CNN political analyst, is a nationally syndicated columnist and author of "Listening to the Spirit Within: 50 Perspectives on Faith," and the forthcoming book, "The First: President Barack Obama's Road to the White House." He is a commentator for TV One Cable Network and host of a one-hour Sunday morning news show.

(CNN) -- When Eldrick "Tiger" Woods joined the ranks of professional golf a dozen years ago, it was via the heralded "Hello, World" Nike commercial. When he steps to the podium Friday to speak to an assembled group of friends, colleagues and journalists, the world will truly be watching to see and hear the greatest golfer of this generation talk about the sordid events over the last three months that have kept him off the golf course and shredded his well-cultivated image and reputation.

The broadcast networks will air live reports with their main anchors there to report and comment on every word; the cable nets will undoubtedly have multiple individuals ready for instant analysis; and millions will tune in to hear Tiger likely apologize and possibly say if and when he will return to competitive golf.

He isn't expected to take any questions, and that has made for an angry bunch of columnists and commentators, denouncing Woods for calling a news conference to make a statement, and not undergo the grilling many want to give him.

Woods hasn't even said a word, and already he's been called a spoiled, petulant child who has lived in a sheltered world of handlers since he was 2 years old. Some have even gone as far as saying nothing has changed about him and he's showing that he is just as selfish and self-absorbed as ever.

Tiger, let me be as clear as I can as to whether you owe me or the American people an explanation of the events surrounding your car accident Thanksgiving weekend: Hell no.

I repeat: Tiger, you don't owe me or anyone else anything!

I'm sick of these sanctimonious folks who are blabbering about Woods needing to be grilled about his private behavior. Look, Tiger Woods didn't cheat on me. He's not my daddy, brother, cousin, church member, neighbor or friend. He didn't let me down or crush my view of him. He is not and never was my role model.

The only people he owes a grand apology are his wife, momma, family, maybe his friends, and his children, when they come of age. He doesn't have to work hard for me to trust him again. The most important audience he has to satisfy is a very small group of people.

That's it. Nothing more. Nothing less.

Ever since I was 14, my desire was to be journalist. And in the last 27 years, I've covered it all. In all of those years, I've never believed I was entitled to ask anyone a question. If it was at a county government board meeting in Austin, Texas, or a city council meeting in Fort Worth, Texas, public officials made a choice to talk to me and other journalists. It's our duty to ask; it's not their obligation to answer.

Yes, they were public figures, but no matter how many times I asked the same question, they didn't have to talk to the media. Should they? Yeah. Must they? No.

Every sports league has a rule requiring their locker rooms to be open to the media shortly after a game ends. Athletes are required to make themselves available or face a fine, but there is nothing that says they must answer our questions. If they choose to expound on what happened in a game, that's their decision. But their personal life? That choice is all up to them.

Yet still, he doesn't owe the American public or me a damn thing.

Meryl Streep has always earned my respect. When you see magazine cover stories on her, such as the recent one in Vanity Fair, she will talk about a host of subjects and pose for a ton of photos, but her family is off limits. She makes it clear: I'll talk about the work, not my home life.

Jodie Foster is the same way. If she is scheduled to discuss a movie, anything work-related is fine. But when you start asking about the father of her children, her love life and anything personal, she shuts you down quickly. In fact, her folks will let you know before the interview what the rules are. She's consistent and clear.

Intensely private people choose to remain that way, whether loving and faithful couples or a married athlete who is accused of bedding anyone and everyone.

Someone's personal life is just that, personal. None of us have the right to know what's going on in someone else's life when they are out of public view, especially if no laws were broken.

I've been clear that I'm a huge Tiger Woods fan. I've walked inside the ropes of many golf tournaments he's played in; shot hundreds of photos of him that hang on my wall; and count an interview with his father, Earl Woods, as one of my all-time favorites. But journalists need to cut the crap when it comes to demanding that he owes it to us to talk to as many of us as possible.

What's amazing is that many of us are hypocrites on this subject. For example, if a journalist is fired, you will hear the suits at the company say they cannot discuss the actions behind the move "because it's a personnel matter." Wait. Isn't a TV anchor, columnist or reporter a public figure? In some cities, they are considered celebrities. So the rules are different for us?

In fact, what if a reporter covered a news conference and returned with a team owner or elected official saying the following about one of their employees: "That's a personnel matter and I'm not at liberty to share with you the details of his termination." Would that editor, news director, or network president say that is acceptable? No! They would jump all over the reporter "to do their job" and keep digging to find out what happened. And the columnists and bloggers would be ripping them to shreds.

So what's the difference between them and Tiger? Personnel? Personal? Hello!

Isn't it amazing how different the view looks from the other side of the river?

We live in an age where public figures often share with the world who they slept with, want to sleep with, what they ate, what they wear, their travel and everything else. Nothing is off limits. The public craves it all on blogs, and in magazines, newspapers, TV and radio. For me, I don't care about any of it.

All I want is to see is a good movie, dance to a great song, watch an awesome sporting event, and witness one golfer take on his peers to become the greatest in the game.

When that public figure, whether Meryl, Jodie or Tiger, chooses to walk off the public stage, they don't owe me or anyone else an explanation. Their body of work is all that matters and that is what we will discuss for generations to come.

Nothing more. Nothing less.