The 'With tears in my eyes' e-mail 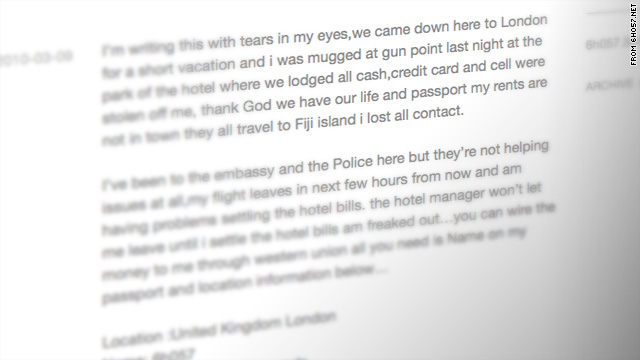 The text of one of the e-mails in which recipients have been asked to come to the aid of their friends.
STORY HIGHLIGHTS
RELATED TOPICS

(CNN) -- When the e-mail arrived the other day, I knew instantly who it was from.

At least I thought I did.

I recognized the e-mail address. It belonged to Kaye Kessler, an old and treasured friend.

When I was a beginning sportswriter, Kessler was the veteran star of the central Ohio paper where we worked. He gave me my first byline, a kindness for which, as I have told him many times, I am forever grateful. He is long retired from daily newspaper work now, living in Colorado, but we write back and forth from time to time.

So I was startled by the first words of his note:

"I'm writing this with tears in my eyes."

He apologized for "this odd request." He said he was in the United Kingdom, on a vacation in London with his family. He said they had been robbed, at gunpoint. Everything had been taken: cash, credit cards, cell phone. He seemed embarrassed to have to be asking:

He wondered if I could lend him some money so he and his family could get back home. He promised to refund it as soon as he was back in the U.S. He wanted me to wire it to him: "Please do get back to me as soon as possible."

I felt so bad for him. He's no longer a young man, and I was touched that, in a crisis, he would turn to me. I've never wired money to anyone before, but I started making calls to find out how to do it.

Then something started to feel wrong to me.

I looked at his e-mail again. The address was his, all right.

But there were some sloppy phrases in the note: run-on sentences, lowercase words that should have been capitalized, some incorrect grammar. Kessler was always an extremely careful writer; he was a disciple of the Scripps-Howard Newspapers stylebook. He didn't make mistakes like that.

There were other off-key things in the note. He said he was in London with his family; I knew that his wife had passed away 15 years ago. He said that they "came down here on a short vacation"; those of us from central Ohio would speak of going down to Chillicothe, or going down to Washington Court House, or going down to Cincinnati, but we would never say we had gone "down" to London.

Still, I thought, he was out of the country, he was in trouble, he was undoubtedly scared, so why was I being such a stickler? He needed my help.

Speaking of which, the subject line of the e-mail was:

Kessler was not a guy who ever overused exclamation points.

I drafted an e-mail back to him, apologizing for the two questions I was going to ask him. But I knew that there weren't many people in the world, other than the two of us, who would know the answers:

1. Who was the makeup editor on the sports desk, with the thick glasses?

2. What was the name of the restaurant next to the paper where we would sometimes eat dinner?

I was about to send him the e-mail when I decided to do something first. I took some of the phrases from his e-mail to me and ran them through a search engine.

They were part of a scam. People around the country had been receiving them; always, the e-mails had been asking for money to be sent.

But how could this be? This was not some e-mail from an address I'd never heard of, saying that a bank in Nigeria had $100 million waiting for me; this was from Kaye Kessler, from his regular e-mail address.

I called his house in Colorado. The phone was busy. For hours.

After about four hours, it finally rang through, and he picked up.

He was home in Colorado. He had never left. He was all right.

Here is what had happened:

The person who had stolen the password had gone through Kessler's e-mail address book and started sending out the heartrending requests for money. The only way Kessler knew about it was that some of the recipients had thought to call him. That's why his phone had been busy all afternoon.

His friends had read him the letter that had gone out using his name.

"To me, it didn't sound like me," Kessler said. "That line about 'I'm writing this with tears in my eyes' -- I don't tear up very easily."

He was doing his best to get in touch with his e-mail provider. Imagine how he was feeling: Someone was now, in effect, him. The person had access of all his saved e-mails, both ones he had received and ones he had sent. He was trying to remember if he had put credit card or banking information in any of the e-mails.

It turns out (and some of you may already know this) that he is hardly the only victim of this scheme, both through e-mails and through social networking sites. Law enforcement officials are well aware of it; after speaking with Kessler, I checked with FBI headquarters in Washington. I wasn't one sentence into reading the Kessler e-mail to Special Agent Jason Pack before he knew exactly what it was.

"This is a new twist that gives these scams more credibility," Pack said. "The way it works is that these guys remotely install malware in your computers; you're almost never aware they have done it." One way the malware is installed, he said, is when you click on a seemingly innocuous link.

Pack said that the malware lets the criminals track your keystrokes from their own computers. That's how they learn your password.

Then, he said, they reset it. You can't log on to your own e-mail account anymore. They control it. They go through your address book and write to everyone you know. The people who receive the e-mails think they're from you, that you're in trouble and that you're turning to them for money. Because it's from your e-mail address, their impulse is to help you out by sending it.

That's part of the scam, Pack said; the thieves set up a way to have the money wired to them.

"The best advice is not to wire money to anyone until you're absolutely sure," Pack said. "Even if a friend is stuck overseas, there are other ways to reach you than sending an e-mail saying you should wire money. Even if a friend's cell phone has been stolen, there are ways to call you."

The problem, he said, is that friends want to help friends who are in need, and the thieves know it. If the friends write back asking "Is this really you?" the thieves, who control your account, send them a note assuring them that yes, the e-mail is legitimate, and say to please hurry up and send the money. Because it's from the familiar e-mail account, and the second note, like the first, is signed with the familiar signature, the friends believe it.

The older e-mail scams -- the ones from odd addresses, saying that there are millions of dollars waiting for you, if you will just get in touch with this person you have never met who wants to make you wealthy -- were more analogous to unsophisticated con games. This newer one, though, is like breaking and entering, like home invasion; we increasingly live on our computers, and this scheme allows the criminals to come inside.

"I'm still trying to get back into my account," Kessler said the next day when I called him again.

The most puzzling part of it, he said -- and the part that should be a concern to the rest of us -- is:

"I have absolutely no idea how they did it. They were out there writing to everyone I know, saying they were me, and I don't know how they got into my computer in the first place."