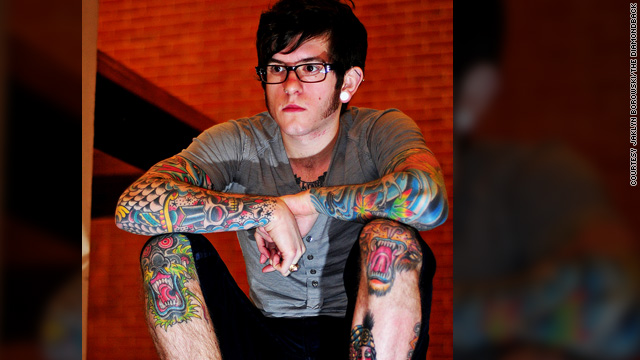 Editor's note: America's 300 million-plus people are declaring their identity in the 2010 Census this year. This piece is part of a special series on CNN.com in which people describe how they see their own identity. David Paul Strohecker is a doctoral student at the University of Maryland, College Park.

(CNN) -- We are often asked to declare our identity for documents, applications, bank loans and even social networking sites. But how much of our identity is lost when we select "female," "African-American" or "Muslim?"

I think much of my own identity is lost when I fill in those boxes. I am technically a white, male, heterosexual, Christian, upper-class Ph.D. student. But I am more than meets the eye.

I'm covered in tattoos and piercings, and this often leads to assumptions about my character. "Is he a drug addict? Is he a skinhead? Does he play music for a band?" I am none of these things. The lesson I hope to teach others through my life is that it's important to see past appearances.

My sociopolitical views are a large part of my identity, and I incorporate these into what I wear; whether it's T-shirts emblazoned with the images of activists whom I admire or deliberately manipulating my demeanor to reflect the "professorial" role I assume in the classroom, I am continually aware that others are reading my presentation as a measure of my character. And it is to this end that I deliberately try to throw people off.

I hope to debunk some of the myths surrounding tattoos and piercings. And I know that everyone who interacts with me is left wondering how someone so "deviant-looking" can be kind, courteous and hospitable.

My body is also a billboard for my life, and my tattoos tell the story of my identity. My earliest tattoos were direct quotes and Bible verses and captured my identity as an outspoken social-justice advocate.

I know that my appearance is misleading, and I know that many people would disagree with what I see as efficacious inscriptions. But one thing is for certain: I will not blend in with the crowd. I will be noticed, for better or worse.

The opinions expressed in this commentary are solely those of David Paul Strohecker.