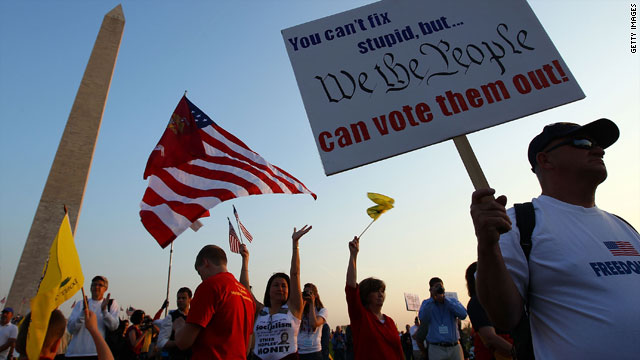 Editor's note: Roland S. Martin, a CNN political analyst, is a nationally syndicated columnist and author of "Listening to the Spirit Within: 50 Perspectives on Faith," and the new book, "The First: President Barack Obama's Road to the White House." He is a commentator for TV One Cable Network and host of a Sunday morning news show.

(CNN) -- An angry bunch of Americans has taken to the streets to protest government spending and the direction of the nation, and judging by the massive media coverage, it's as if we have been invaded by a foreign entity, marching on state capitals and Washington ready to lead a coup d'état against our elected officials.

The rise of the Tea Party is being chronicled as a threat to democracy, or a grassroots collective unlike anything we have seen in many years.

As Public Enemy wisely put it with their hit song in 1988, "Don't Believe the Hype!"

How can any liberal, progressive, moderate or conservative be mad about a group of Americans taking to the streets to protest the actions of the country? What they are engaged in is constitutional. The freedom to assemble, march, walk, scream and yell is right there in the document we all abide by.

Do I object to idiots holding up clearly racist signs, as well as the stupidity of images of President Obama as Hitler? Of course. That ignorance detracts from whatever commentary they are trying to make on the status of the nation.

When I debated Tea Party leader Mark Williams on CNN's Anderson Cooper 360 show a few months ago, I was appalled when he was unwilling to say that if someone came to one of his rallies with a racist sign, he would tell them to take it down.

He tried to invoke the First Amendment, but he was clearly offering people comfort for such shenanigans.

But it's clear that most of the folks attending Tea Party rallies are not bigots and homophobes. There are ignorant fools in all groups, and the Tea Party is no different.

If anyone wants to oppose the Tea Party for spreading misinformation, do that. But to assert that it's wrong to take part in civic engagement is utterly silly. The best of this country came out of the action of those in the streets.

For those who oppose the Tea Party, you have every right to gather with those who agree with you and take to the streets. If they oppose the policies of President Obama, and you support them, demonstrate your support for his agenda. Don't whine about someone else making noise. Men and women, stand up and be heard.

And if you want to oppose the Tea Party, do so on the facts.

It's laughable when a Tea Partier laments taxes in the U.S. when, for the middle class, they are virtually at their lowest level in more than 50 years.

To suggest that 95 percent of Americans didn't get a tax cut in President Obama's first year is just dead wrong.

The reality is that the Tea Party is more aligned with Republicans. According to a CBS News/ New York Times poll released last week, 18 percent of Americans say they view themselves as a member of the Tea Party; 54 percent are Republicans; and 89 percent are white.

So what we really have here is a group of people who are more likely than not to support GOP candidates nationwide. I don't view the Tea Party as being some new entity that is drawing out disenfranchised voters who have long been absent from the process. They are no different in 2010 than what MoveOn.org was in 1998: a group of disgruntled Americans operating outside of the traditional two-party apparatus and expressing their own self-interests.

I more than welcome the Tea Party folks. Protesting is America at its finest. But I'm also not fooled one bit by them.

Folks, this isn't a radical transformation of the nation shaping up. It's the latest effort by citizens primarily in one party or professing one ideology to rise up and allow their voices to be heard.

And that's a good thing.