Opinion: The media is obsessed with how Muslim women look

By Fatemeh Fakhraie, Special to CNN 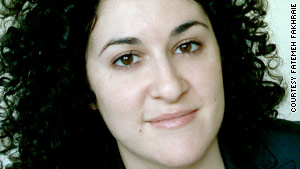 Editor's note: Fatemeh Fakhraie is the Editor-in-Chief of Muslimah Media Watch and Contributing Editor for Altmuslimah. She writes for CNN as part of the "Muslim in 2010" special coverage.

(CNN) -- Muslim women are more high profile than ever in 2010. However, a problem remains: news stories about them are fixated on appearance.

Most major stories about Muslim women revolve around how they look and what they're wearing -- not who they are and what they are doing.

An obvious example is the burqa ban coverage. Earlier this year, France started an international debate on burqas when it banned the face-covering veil that less than a thousand women in the entire country wear.

A flurry of articles came forth in both repudiation and defense of the burqa ban, focusing on that little piece of cloth that covers some women's faces.

There were articles accusing the niqab of "com[ing] from an ideology that basically wants to hide women away," and of being "a new form of enslavement that the [French] republic cannot accept on its soil."

The entire idea of paying attention to fashionable hijab calls attention to what a woman wears, rather than who she is.
--Fatemeh Fakhraie
RELATED TOPICS

Other articles lauded it as "a comfortable garment" and "part of our identity," condemning the ban as an erosion of personal freedoms and counter to the principles of the French republic.

High visibility does not directly translate into having your voice heard.

Speaking of what some Muslim women wear, plenty of sartorial articles popped up this year, calling attention to the fashionable styling of head scarves.

In June, the LA Times profiled fashionable, head scarf-wearing Muslim women in an article titled, "Wrapped up in style," while several British outlets highlighted Muslim fashion designers who created clothing with their own closets in mind.

Though this is decidedly more positive than the coverage surrounding the burqa ban -- which paints women as incapable of fitting into Western society because they cover their faces -- it still falls short of ideal.

The entire idea of paying attention to a fashionable hijab calls attention to what a woman wears, rather than who she is.

Additionally, the articles put forth the idea that these women's style puts them "towards the mainstream," assuming (as the burqa ban articles did) that you can tell a woman's patriotism, ideology, and viewpoint by what she wears.

Another big story this year was Rima Fakih, an Arab-American Muslim woman, who won the Miss USA pageant.

Her win mostly divided people into two categories: those enthused and those repulsed. While her background was a major talking point, many of those who were repulsed pointed to her clothing (or lack thereof) as negative.

The latest news stories regarding Miss USA profile her fasting for Ramadan. But, more outlets have focused on the scandal surrounding her topless promotional photos for the Miss Universe pageant -- which she took along with every other contestant, including other Muslim candidates.

Even the coverage surrounding the Time magazine cover with 19-year-old Afghan Aisha, the young girl whose nose and ears were cut off after she fled abusive in-laws, focused on her appearance rather than how she was overcoming the horrific ordeal she endured.

She was on that cover to be stared at and serve as a warning against U.S. troops leaving Afghanistan because of how she looks (she has since come to the U.S. for reconstructive surgery).

Many articles about the Time cover and her subsequent surgery referred to Aisha as "disfigured" or "mutilated," concentrating on her facial features. While the point of her cover was supposedly about Taliban brutality, the real issue was the hole in Aisha's face.

The majority of media trends regarding Muslim women in 2010 have revolved around how they look: what they wear or don't, and what it all means. This isn't much different from coverage in years past, and it doesn't mean that their media images are any more accurate or well rounded.

So while Muslim women may be at the center of unprecedented levels of media popularity, their time in the sun may do little more than burn them.

The opinions expressed in this commentary are solely those of Fatemeh Fakhraie.