Jon Stewart has the right idea 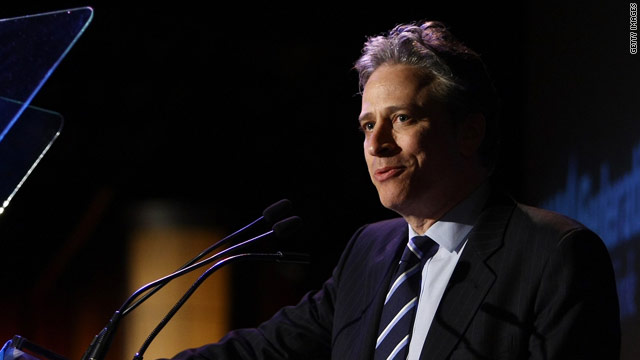 "Daily Show" host Jon Stewart is planning a rally for moderates on the weekend before Election Day.
STORY HIGHLIGHTS

Editor's note: John P. Avlon is a CNN contributor and senior political columnist for The Daily Beast. He is the author of "Wingnuts: How the Lunatic Fringe Is Hijacking America."

New York (CNN) -- Are you tired of the extremes dominating the debate? Angry about hyperpartisans hijacking American politics? Well, Jon Stewart has a rally for you and me.

The Rally to Restore Sanity is slated for October 30, the weekend before Election Day, on the Washington Mall.

This isn't a concealed campaign rally for either party. It's a counterprotest against the rising tide of conformity that causes hyperpartisans to demonize people with whom they disagree. It's the anti-demagogue Saturday on the mall; people taking to the streets and yelling, "Be reasonable!"

Here's how Stewart described it on "The Daily Show": "We live in troubled times, with real people who have real problems. ... Problems that have real but imperfect solutions, that I believe 70 to 80 percent of our population could agree to try, and ultimately live with. Unfortunately, the conversation and the process is controlled by the other 15 to 20 percent.

"You may know them as the people who believe that Obama is a secret Muslim planning a socialist takeover of America ... or that George Bush let 9/11 happen to help pad Dick Cheney's Halliburton stock portfolio. You've seen their signs: 'Obama is Hitler'; 'Bush is Hitler'... But why don't we hear from the 70 to 80 percenters? Well, most likely because you have sh*t to do."

Among the signs suggested for the rally:

-- "I disagree with you, but I'm pretty sure you're not Hitler"

-- "I'm not afraid of Muslims, Tea Partiers, Socialists, Immigrants, Gun Owners or Gays ... but I am scared of spiders."

-- "Take it Down a Notch For America"

In the week since the Rally to Restore Sanity was announced, more than 100,000 people have signed up on Facebook (not exactly a scientific measure of success but a good gauge of interest), and more than 900,000 people have watched the announcement on the Comedy Central website.

For those who like their mock politics laced with paranoia, the indispensable Stephen Colbert is offering an alternative to the earnestness with his "Keep Fear Alive" rally. Those three words sum up an entire established media and political strategy.

All this excitement is a reflection of the fact that Jon Stewart earned the title of "the most trusted man in news" in a Time magazine online poll last year.

Sure, Stewart and Colbert are comedians and their rallies could wind up boosting ratings for their shows. But there's a serious point underlying these events.

Media manipulation by professional partisans on both sides has become so predictable that satire has emerged as the last, best way to cut through the spin cycle.

Viewers' intelligence is respected even as they are entertained, and between laughs the civic backbone begins to straighten a bit. News doesn't need to taste like medicine, and nonpartisan does not have to mean neutral.

There is a silent majority of Americans who feel politically homeless in today's polarized debates. They are not activists obsessed with politics. But they are no less patriotic than the partisans.

They are active citizens with busy lives. They view government as an attempt to solve problems, not a war between special interests or an hate-fueled ideological debate camp. And too often they are ignored.

The political extension of that approach is the low-turnout closed partisan primaries that get flooded with out-of-state activist money and nominate a Christine O'Donnell in Delaware or kick out Mayor Adrian Fenty in Washington without ever giving independents or members of the opposite party a chance to vote. All this will seem absurd one day, but right now it's the status quo.

Our country is being polarized for political, partisan and personal profit. And it's time for the center to push back.

Unconnected but not unrelated to the Stewart rally is another sign that the center is starting to strike back -- independent New York City Mayor Mike Bloomberg is supporting centrist candidates on both sides of the aisle, a mind-blowing idea in the "your team vs. mine" world of Washington.

But of course that centrist approach is how most Americans think -- they try to vote for the person, not the party.

And they understand that the two parties have increasingly become obstacles to the open functioning of democracy. That's why 40 percent of Americans have declared their independence from the two parties, creating the largest and fastest-growing segment of the electorate, independent voters.

I wrote "Wingnuts" to warn about the rise of extremism in the age of Obama, detailing the way hyperpartisans have hijacked our politics and artificially divided our country. We are now locked in a cycle of incitement that is crippling our ability to unite and solve problems absent a crisis.

It's a long war, with plenty of battles won and lost but Stewart has been sounding the alarm for a while. In my appearance on "The Daily Show" five years ago, I first heard Stewart offer up the ironic battle cry "take to the streets and yell 'be reasonable!' " Now it's time to put that idea into action.

People are already asking whether Stewart's "Restoring Sanity" rally can outdraw Glenn Beck's "Restoring Honor" religious revival on the Washington Mall this summer. It's a proxy for the larger question of whether the centrists will ever care as much as the activist extremes.

Others question why we should take this media event seriously in a high-stakes election season. It matters because we're going to need to draw on this spirit no matter what happens on Election Day.

If humor can help rebalance politics by pointing out the absurdities of what currently passes for debate, it is far better than throwing more red meat into the arena. It's even better if the proponent punches both left and right as a matter of principle, as this rally promises to do.

More examples of independence might be what it takes for the news industry to be trusted again as the honest brokers of American politics.

The opinions expressed in this commentary are solely those of John P. Avlon.