Why sharing is a beautiful thing 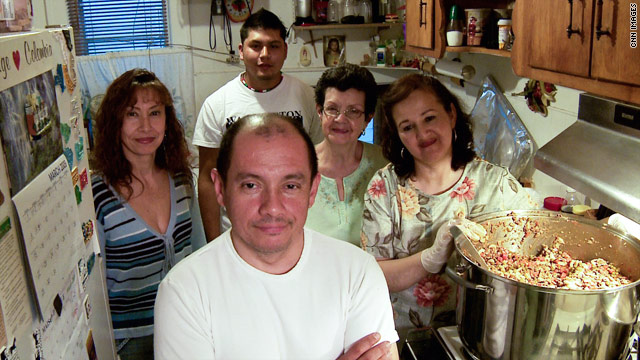 Jorge Munoz and his team prepare food for the homeless.
STORY HIGHLIGHTS

Editor's Note: This is one in a series of articles about CNN Heroes. Jorge Munoz was named one of the top 10 CNN Heroes for 2009. The tribute to the top 10 heroes of 2010, hosted by Anderson Cooper, will be shown Thanksgiving night at 8 p.m. ET. Voting for the 2010 CNN Hero of the Year is under way at CNNHeroes.com.

New York (CNN) -- Jorge Munoz is a bus driver in New York City who started feeding the hungry in Queens five years ago, using food that would otherwise have been thrown away. And that's how he discovered a secret -- the power of sharing.

"People are telling me, 'Jorge, you have no money, you do all this and get nothing back.' And I say I have a checking account full of smiles."

Munoz has been recognized as a Top Ten CNN Hero in 2009 and received the U.S. Citizens Award from President Obama. His website is AnAngelinQueens.org.

CNN: What is it that made you decide to do what you do every day?

Jorge Munoz: In the beginning it was to try to avoid wasting food in the garbage. But then I realized it was like a mission from God for my family. That's how we see it.

I was working in a summer camp on Long Island and I was waiting for the kids on the bus, and across the street was a food processing plant. I saw a couple come out with a lot of food, and it was good food. I asked them about it and they said they had to throw it out every Friday. But it was good food and I asked them about it, if they could give it to me because I knew someone would want it.

So in Jackson Heights I saw people waiting on the corner, and I asked them what they were doing and they said they had no money for food. So I called my mom and I said I had people to give the food to. At first we brought food for eight guys. And a few days later I saw a few of them on the corner and I asked them about it and they said they sleep under the bridge. That's when I decided to bring them food [every day]. And the first week it was eight guys, and the next week 24 and so on.

Take the iReport challenge: Be an everyday hero

CNN: Are you out there every day? What do you provide for people?

Munoz: In these 6 ½ years we've been doing it, I've missed one day because of a snowstorm. And we've distributed 121,000 meals over the years, might be more. But every day we make 120 to 140 meals. For the last few months, every piece of bread I get I bring in the morning with soda or water that I buy. Besides meals, we provide hot coffee, tea, a piece of cake and sometimes my mom makes chicken soup. And when I have money I provide fruit. When I have a budget, when winter is here, I provide caps, underwear, winter hats, scarves, boots. And this time of the year, on the website, I ask for coat donations. I need about 100 coats because these guys sleep on the street.

CNN: Why is what you do important today?

Munoz: Because I have a family at my house and I have a second family out there. And that's about 130 to 140 guys. And there's always a line out there. And the economy is not good right now, and those who have a place to stay have to choose between a place to live and food. And when we're there they have something to eat. At least we provide a little something, and the only thing we ask in return is a smile. If you hand a meal to someone who hasn't eaten anything in the last 20 hours and they smile, you know you did something good.

CNN: How much food do you cook in the space of a week?

Munoz: In a week it's hard to say, but for example, tomorrow we're going to cook 22 pounds of rice, 15 pounds of pasta, 10 pounds of frozen vegetables, 10 pounds of onions, 8 to 10 pounds of peppers, 60 pounds of chicken, we do that through the oven. My mom, she's the one who creates the menu and every day we change the menu.

CNN: What was it like to become a CNN Hero and what has your life been like since?

Munoz: To become a CNN Hero, being nominated, it's a great honor for me, for my family and for my country [Colombia]. So they know -- I had the chance to be there for almost a month and when I went into a neighborhood and people knew, or even here in New York, people recognize me. And it helped me around the world. One example, there was a teacher in Afghanistan and she e-mailed me saying she wanted to start a small meal program in their town because of my story. And there was a little girl in Texas, I think she's 8, after CNN Heroes, she saw the show and the next weekend she went out with her friends and family and sold brownies and lemonade and made $25 and sent it to me with a note saying she was touched by my efforts.

CNN: Are you planning on expanding your efforts beyond Queens?

Munoz: Yeah, we already did. Right now, about a month ago, three volunteers they're doing breakfast in Brentwood and two small towns in Long Island. And in Elizabeth, New Jersey, they're starting a meal program and they're opening one in Miami with sandwiches and water. I'm with them and they're helping me out.

CNN: You received the U.S. Citizen's Award from President Obama this year -- what was that like and what did that mean to you?

Munoz: That was a great honor. A great honor. Why, because not that many people have a chance to go to the White House invited by the president of the United States. And he told me I did a great job and to continue doing what I'm doing. Today President Barack Obama wants to shake your hand and tell you not to give up your mission.

CNN: Who is your biggest inspiration?

Munoz: My mom. I always say my mom is my hero. Because she taught me how to share. She told me if you share you're OK with God.

CNN: What would you say to people who are trying to figure out a way that they can give back to their community?

Munoz: If you share, share anything you have you're not using like clothes, toys, share it to make other people happy. People in this country cook more than they need and two days later it goes from the refrigerator to the garbage. If you see someone standing on the corner and have $2, buy them a cup of coffee and a piece of bread. I'm doing it seven days a week, but just do it once in a while and you'll feel what I feel. And when that person is smiling at you you'll know you're doing something good. Do it from the inside.