By Phillip Dennis, Special to CNN 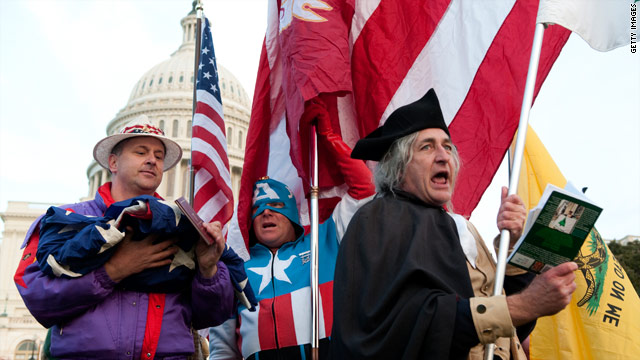 Tea Party activists rally on the west lawn of the U.S. Capitol in Washington on Election Day.
STORY HIGHLIGHTS

Editor's note: Phillip Dennis is the founder of the Dallas Tea Party and sits on a three-person steering committee. He is also the Texas state coordinator of Tea Party Patriots and an adviser to the National Tea Party Coalition.

For nearly two years, Americans told the Democrats they did not approve of expanded government programs with large price tags such as bailouts, the stimulus bill, Cash For Clunkers, cap and trade and "Obama care."

Time and time again, the Democrats, misreading their election win as a mandate to increase the size and scope of the federal government dramatically, rammed through unpopular legislation against the will of the majority of the American people. Tuesday, they paid the price for their arrogance and miscalculations.

The Republicans won by virtue of not being Democrats. They did little to earn their victory. To many, their Pledge to America is weak tea and doesn't go far enough in reducing spending and the size of the federal government.

Nikki Haley: Back to basics

I was proud to help organize the first Tea Party in Dallas. Dallas was one of the first cities to protest the Obama stimulus bill at the inception of the current Tea Party movement.

Americans expressed their outrage at the size and cost of the stimulus and the fact that their leaders had not even read the $786 billion bill before passing it. It was political arrogance at its worst.

President Obama and the Democratic majority misread the 2008 election. They envisioned their victory as a mandate to take America to a European-type socialist democracy based on the legislation they have passed or proposed.

No one had any idea that cool February day in 2009 that the Tea Party movement would become a major power in American politics. Few in the Tea Party had ever been seriously involved in politics outside of voting in the general elections. But the outrage over the fiscal irresponsibility of the Republicans during the Bush administration raised the ire of fiscal conservatives.

As bad as the fiscal performance of the Republicans under President Bush was, no one was prepared for the avalanche of spending from Obama, House Speaker Nancy Pelosi and Senate Majority Leader Harry Reid. The budget deficit in the fiscal year 2009, which included most of the first year of Obama's term and which included spending initiatives undertaken by both Obama and Bush, was four times higher than in 2008. The stimulus was the catalyst that brought everyday fiscal conservative taxpayers out of their homes and offices and into the streets in protest for the first time in their lives.

If Republicans misread the intent of the American voter and are as fiscally reckless as they were during the Bush years, they soon will find themselves packing their bags and being replaced by a new crop of leaders who understand America will no longer tolerate reckless spending and misguided fiscal policies.

The opinions expressed in this commentary are solely those of Phillip Dennis.