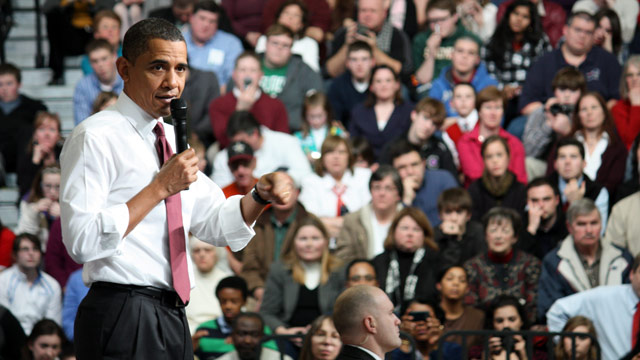 The president used the event to spotlight his call for a $30 billion investment in a new small-business lending fund.

This measure will help ensure "small businesses are once again the engine of job growth in America," Obama said in the city of Nashua. It's "absolutely critical that Congress acts" to help pass this and other job creation legislation.

While credit conditions for large businesses have improved over the past year, small companies are still widely reporting problems finding the capital they need to fund their operations.

Since small businesses employ about half of American workers, policymakers worry that the ongoing credit crunch they face is contributing to the nation's high rate of job losses.

Under Obama's plan, banks with assets of less than $10 billion would be able to borrow money from the Treasury at a dividend rate as low as 1 percent if they use the cash to make more small-business loans this year than they did in 2009.

Obama's visit to New Hampshire, several political analysts said, was part of the White House's ongoing effort to recapture sorely needed political momentum. The state, which is home to the first-in-the-nation presidential primary, is considered in many ways to be a political bellwether for an administration struggling to maintain the support of independent voters.

More than 40 percent of the state's voters were registered as independents as of last November, according to the New Hampshire secretary of state's office.

Obama easily carried the state in the 2008 general election, but a slight plurality of New Hampshire voters disapproved of his job performance in a December 2009 American Research Group survey.

Tuesday's trip was Obama's second visit to New Hampshire since becoming president. While the town hall participants gave his small-business proposal a warm reception, they also raised questions about a series of other issues, including education, energy independence, government transparency and health care reform.

"We're in the red zone. We've got to punch it through," Obama said about the stalled health care legislation. "I do not quit. We are going to get that done." Obama said supporters of the legislation "have to move methodically and [ensure] the American people understand exactly what's in the bill."

CNN's Catherine Clifford and Alan Silverleib contributed to this report.