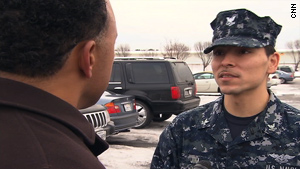 Navy Petty Officer Alan Jim said gay and lesbian service members are treated "the same as everybody else."

Washington (CNN) -- As the military examines its policy banning openly gay, lesbian and bisexual people from serving, those who have lived with "don't ask, don't tell" are talking about their experiences and concerns.

"In a way, I think it should just be left alone," said Navy Airman Lindsay Runkle. "Personally, I think everything's fine the way it is now. ... if you get rid of it, I think it'll just cause way too many problems."

Runkle says the existing policy is part of military life. Nobody asks. Nobody tells.

"There's nobody out trying to hunt somebody down saying, 'Oh my gosh, kick them out -- they're gay! They're lesbian!' " Runkle said. "There's nothing like that at all."

Some service members and veterans, though, have had a different experience.

Darren Manzella -- a former Army sergeant who served in Iraq until he was discharged under "don't ask, don't tell" -- said that if anything, coming out to his unit "brought us closer together."

Congress is hearing testimony from Defense Secretary Robert Gates and other military officials who support President Obama's desire to repeal the law, which was congressionally mandated in 1993. Along with barring openly gay, lesbian and bisexual individuals from serving, the policy prevents the military from asking them about it.

Gates told a hearing on Tuesday that he wants a plan to repeal the law by the end of the year and guidance on how to enforce the existing law more humanely within 45 days.

Critics question the timing of repealing the law with the military engaged in two wars.

Do you think "don't ask, don't tell" should be repealed?

Navy Petty Officer Cody Guadagnoli said that as long as homosexual relations stay off the ship he serves on, "then it really doesn't impact the workplace."

But Army veteran Jon Soltz, chairman of VoteVets.org, a group advocating veterans issues, said that some of those concerns are nonissues when it comes to combat.

"First off, there are already gays in the military. Second off, we have extremely strict guidelines in the uniformed code of military justice," said Soltz, a former captain who served in Iraq. "Why can't we use the same very strict guidelines about public displays of affection with heterosexuals to go ahead and include gay relationships as well?"

Navy Senior Chief Diego Reyes said despite his personal feelings, he is not worried "about the person right next to me, who's taking on the enemy."

Soltz says he has greater concerns with letting felons serve in the military.

"For people who question the readiness argument: When you go and let felons into the military ... it causes tremendous problems for us on the ground," he said. "It's much more of a readiness cohesion issue than [don't ask, don't tell] is."

As for whether unit cohesion will break down -- a point advocates of the law often use as a main argument -- if gays are allowed to serve openly? Manzella, the former Army sergeant, said that's not the case.

"I have a perfect example for that. I served openly for nearly two years in the military -- 14 months of that serving in the Middle East," Manzella said. "And my commander knew I was gay. My peers, colleagues knew I was gay."

Navy Petty Officer Alan Jim said that gay and lesbian service members are treated "the same as everybody else" and are simply "proud of what they do for our country."

Bob Kavanagh once considered joining the military but chose not to because of the don't ask, don't tell policy -- and the guilt he'd face from hiding his sexuality.

"Hands down it was don't ask, don't tell" that deterred him, he said. "It was too hard to think about going into the service, having to hide a part of who I am."

Kavanagh, a doctor, said that the idea that cohesion would crumble because straights and gays would be showering together is absurd. It would be no different, he added, than his experience playing sports.

It was too hard to think about going into the service, having to hide a part of who I am.
--Bob Kavanagh, who chose not to enlist because of "don't ask, don't tell"
RELATED TOPICS

But there are serious issues, according to the Center for Military Readiness, which describes itself as an independent, nonpartisan public policy organization.

In a report released in January titled "Consequences of the Proposed New 'LGBT Law' for the Military," the authors write that gay activists and their liberal allies "cannot justify the heavy costs of repealing the 1993 law. ... Implementation would result in the voluntary or involuntary loss of thousands of personnel -- many in communities, grades, and skills that are not easily replaceable."

"This would cripple the All-Volunteer Force at a time when we are at war," the report added. "Personnel remaining would have to face more deployments and potential combat situations with fewer, less-skilled people."

CNN's Chris Lawrence and Laurie Ure contributed to this report.