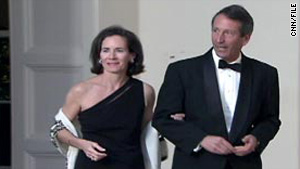 Washington (CNN) -- When South Carolina Gov. Mark Sanford returned to the United States last June from Buenos Aires, Argentina, where he had been having one last secret tryst with his Argentine mistress, he hopped in a vehicle driven by a former aide who had sped through the night to meet him at the Atlanta airport.

Sanford was on his way back to Columbia, to appear before a phalanx of reporters and television cameras to explain to South Carolina and the nation why he had mysteriously disappeared from the state a week earlier.

But first, he had to call and check in with his trusted political adviser -- who also happened to be the wife he had betrayed.

"Do you know what kind of storm you are returning to?" an incredulous Jenny Sanford said she asked her husband. "And where do we stand?"

Her husband told her the "good news": The affair, which Jenny Sanford had discovered the previous January, was finally over after a year. "I told you, it's all behind us," he explained. "Everything's good."

"Good?" Sanford writes in her new memoir, "Staying True," which landed in bookstores Friday. "What part of this did he think was good?"

Mark Sanford's office had no comment on the book.

Chris Allen, the aide who sat alone in the car with Sanford as he spoke to his furious wife on the phone, told CNN in an e-mail Friday that the drive to Columbia was "awkward, emotional, almost fictitious, and at this point a blur."

Allen also remembers that in the following days he witnessed an outpouring of support from the people closest to the Sanfords. "Days like that cause people to forget about the political and concentrate solely on the personal," he wrote in the e-mail.

That's the story Jenny Sanford attempts to tell in the much-anticipated memoir, a book peppered with Bible verses and anecdotes about the strength and inspiration derived from friends and family in the face of astonishing personal upheaval.

But the book also reveals that Jenny Sanford, despite her famous refusal to play the role of loyal spouse in the aftermath of the affair, may have invested too much of herself in her husband and his neverending political pursuits. Though she maintains that she loved him despite his flaws, she writes painfully of the strain his busy public career put on their marriage and wonders whether she should have ended their relationship years earlier.

As the Republican governor rose in national prominence and drew mention as a potential White House contender -- most famously during his fight against the stimulus bill last year -- Jenny Sanford wrote that he was consumed with "unquenchable ambition" and had become "the empty-eyed politician he used to abhor."

Jenny Sanford, her critics suggest, was a knowing partner to that personality change. Since her days managing his first campaign for the House, she developed a reputation in Columbia as a savvy political operator and controller of her husband's image.

In the tumultuous weeks following Mark Sanford's admission last summer, for instance, his wife phoned several key political allies and urged them not to call for Sanford's ouster -- a piece of maneuvering that may have saved his job. That detail goes unmentioned in the book.

She also recalls strategizing briefly by phone with her husband before his infamous press conference. "Whatever you do, don't talk about your heart," she told him, a piece of advice that apparently went unheeded.

Jenny Sanford devotes page after page to roasting her husband for his selfishness and mushrooming ego, but she admits that warning signs were there, even the early days of their relationship.

She writes that when she became pregnant with their first child, Mark Sanford joined her at one Lamaze class before deeming it "a waste of his time." He explained, "I've spent many long nights helping cows give birth and I know what to do when the baby gets stuck." Jenny Sanford's sister flew in to be with her for the birth instead.

When her grandfather died early in their marriage, Mark Sanford refused to make the trip to Chicago for the funeral because he "had only met him a handful of times," according to the book.

Later, while in Congress and living in Washington, the notoriously frugal Sanford once purchased a diamond necklace for his wife, who was residing with their boys back in Charleston, she writes.

Jenny Sanford wore it with pride, but when her husband returned home and saw her wearing it proudly, he said, "That is what I spend all that money on?! hope you kept the box!" He returned the necklace the next day.

Even with the relentless tales of marital stress, there is little time for self-pity in "Staying True." While her husband is depicted as spending his adult life restlessly pursuing his political goals, Jenny Sanford writes lovingly of her busy life as a mother to the couple's four rambunctious boys.

Meanwhile, she came to realize that her marriage -- which grew even more distant as he began his affair -- wasn't exactly a romance novel.

"Certainly I didn't always feel loved by him or have that 'in-love' feeling for him as often as I would have liked, but that, I rationalized -- and believed -- was real marriage," she writes.

Despite the collapse of her marriage -- Jenny Sanford filed for divorce late last year -- she believes that her faith in God and "firmly planted" feet will carry her forward.

"I have loved and will love again," she writes.