Washington (CNN) -- The thorny intersection of race and the economy topped the political agenda Wednesday as President Obama huddled with key African-American leaders at the White House.

Obama held what has been dubbed an "urban economy summit" in the Oval Office with a group including the Rev. Al Sharpton, NAACP President Benjamin Jealous, and National Urban League President Marc Morial.

National Council of Negro Women Chairwoman Dorothy Height, who is 97 years old, declined an invitation to attend due to the winter storm pounding the Washington area.

The group urged Obama to spend money initially reserved for bank bailouts on areas suffering from chronically high unemployment, according to sources familiar with the attendees' plans.

The investments should be "place-based rather than race-based," Jealous said.

The cornerstone of the civil rights leaders' plan calls for $150 billion in TARP (Troubled Asset Relief Program) funds to be redirected to state and local governments to hire workers to provide critical services in underserved communities.

The White House has not yet proposed tapping the TARP fund for a new jobs program, with the exception of potentially using it to help expand credit lines for small businesses.

The nation's first African-American president remains extremely popular among black voters. A number of African-American leaders, however, are increasingly upset with what they perceive as the federal government's inattention to the needs of economically hard-hit minority communities. 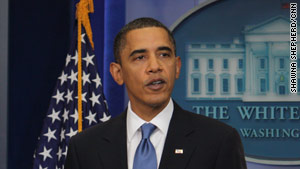 But he said African-Americans do "expect to be included in the process" as Congress debates a new jobs bill and are seeking "substantive change" and not mere "feel-good moments."

Jealous blasted what some political observers have characterized as a GOP strategy of complete opposition to Obama's agenda.

While the national unemployment rate is now 9.7 percent, the jobless rate among African-Americans is hovering around 15 percent. Over 40 percent of black teenagers are unemployed, according to the National Urban League.

Obama has previously argued that the administration's $862 billion stimulus package, as well as its other job growth initiatives, would benefit many of the country's hardest-hit communities.

The plan presented to Obama was expected to include recommendations to:

• Provide a stronger focus on communities with high unemployment;

• Invest $500 million for housing counselors to work with people who are delinquent on loans;

CNN's Suzanne Malveaux and Alan Silverleib contributed to this report.