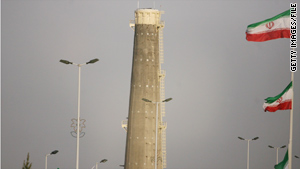 Iran has said it will begin enriching uranium to a higher level at its Natanz facility.
STORY HIGHLIGHTS

Washington (CNN) -- A soon-to-be completed U.S. assessment of Iran's nuclear program is expected to conclude that the government has resumed limited work on a nuclear weapon, according to a U.S. official.

Such a conclusion in the new National Intelligence Assessment would revise a controversial assessment released in 2007 that said Iran had stopped its weaponization program in 2003. Many Western intelligence services disagreed with the U.S. conclusion at the time.

The U.S. official -- who is familiar with the report but is not authorized to speak on the record because of the sensitive nature of the information -- said the new assessment "will move forward a tad" Iranian efforts on weaponization. The official says Iran is now focused on research of a program as opposed to full-blown development of a nuclear warhead: "The emphasis is on the 'R,' not the 'D.' "

Nuclear weapons expert David Albright disagrees, maintaining that the Iranians don't need to do their own research because it has been done by other nations.

"They are trying to copy, to learn how to make weapons based on what they know from others. This is development," he said.

But even as Iran continues to develop various nuclear capabilities that it says are for peaceful purposes, both Albright and Obama's director of national intelligence, Dennis Blair, say they believe that it has not made the political decision to move forward and actually build nuclear weapons.

Recent actions by Iran, however, have given the Obama administration new ammunition to support its contention that Iran intends to produce nuclear weapons eventually, a move the United States believes would destabilize the Middle East.

At a news conference on Tuesday, President Obama chastised the Iran leadership, saying that "despite their posturing that their nuclear power is only for civilian use, that they in fact continue to pursue a course that would lead to weaponization."

Last week, Iran said it had launched a satellite into space for telecommunication and research purposes.

Then on Sunday, Iranian President Mahmoud Ahmadinejad announced that his government would begin enriching uranium to a level of 20 percent at its Natanz enrichment facility for use in a medical research reactor.

Iran had been enriching uranium to a very low level of 3.5 percent but needed a higher level of enrichment to produce medical isotopes.

The International Atomic Energy Agency appeared to have brokered a deal with Iran to send its low-enriched uranium to Russia or France for conversion to fuel rods that could be used in its medical reactor. But Iran backed out of the deal.

The U.S. director of national intelligence tied Iran's satellite launch to its efforts to improve its ballistic long-range missile force. Blair recently said at a congressional hearing that the Iranian launch "enhances its power projection and provides Tehran the means for delivering a possible nuclear payload."

He said there are other indications that Tehran is keeping open the option to develop nuclear weapons and pointed to the public disclosure last fall of a secret second enrichment facility near the city of Qom.

The intelligence community is looking for signs of other unknown enrichment facilities since the Iranians tried to hide the Qom plant by building it into a mountain.

Albright, who is founder and president of the Institute for Science and International Security, believes that the discovery of the Qom facility has set back Iranian efforts.

He says Qom "would most likely have been the breakout facility" for nuclear weapons production.

He doubts Iran would use Natanz, which is under the watchful eye of the IAEA, to produce weapons-grade uranium.

"Iran needs a secret facility to do so, mostly out of fear of a commando raid by the Israelis," he said.

It is unlikely, Albright adds, that Iran has a third enrichment plant in the works, because its "resources are strained. ... Iran doesn't have a deep enough bench of nuclear scientists and experts."

Officials and experts believe the Natanz facility has also had its share of problems. Albright said Iran has "struggled" with getting the performance from the centrifuges that is needed for enrichment.

A new report issued by Albright's think tank states, "Iran has moved too quickly to install centrifuges at the expense of developing competence in operating them reliably. In the process, it has made many mistakes."

The report says Iran might have experienced a number of problems resulting from outdated centrifuge parts, impurities in domestic uranium stock, operational instabilities and possibly sabotage.

Blair told Congress that although Iran has significantly increased its number of centrifuges at Natanz over the past two years, only about half of them work. He said Iran "has had problems operating those centrifuges, which has constrained the production of low and rich uranium."

But despite a number of problems with its program, the director of national intelligence said, "Iran has the scientific, technical [and] industrial capacity to produce enough highly enriched uranium for a weapon in the next few years."