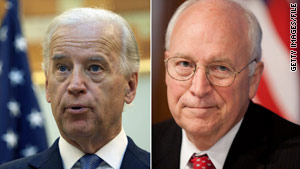 Washington (CNN) -- Vice President Joe Biden and his predecessor Dick Cheney sparred Sunday over terrorism and the Iraq war, duking it out on the most prominent of platforms: the political TV talk show.

In separate appearances on different programs, Cheney called the Obama administration "dead wrong" about al Qaeda and Iraq, while Biden accused Cheney of trying to "rewrite history" and downplay Obama's actions against terrorism.

However, the former vice president did call himself "a complete supporter" of Obama's Afghanistan strategy. He also expressed some support for Obama's decision to ask the military to drop its "don't ask, don't tell" policy. Citing military chiefs' support for the change, Cheney -- whose daughter is openly gay -- said he believes "society has moved on" and that it is "time to reconsider the policy."

But much of the three interviews -- Biden on NBC's "Meet the Press" and CBS's "Face the Nation," Cheney on ABC's "This Week" -- focused on the deep divide between the two sides.

Cheney, an outspoken critic ever since leaving office, recently accused the Obama administration of failing to treat the fight against terrorists as war. He cited the decision to give accused 9/11-mastermind Khalid Sheikh Mohammed a civilian trial, giving the failed Christmas Day airline bomber the privileges of the U.S. criminal justice system, and the decision to shut down the U.S. military prison at Guantanamo Bay, Cuba.

"I just think that's dead wrong," Cheney told ABC. "I think the biggest strategic threat the United States faces today is the possibility of another 9/11 with a nuclear weapon or a biological agent of some kind, and I think al Qaeda is out there even as we meet trying to figure out how to do that."

On CBS, Biden shot back. "I don't know what Dick doesn't understand. The worry is legitimate. The reason why I do not think it's likely is because of all the resources we have put on this, considerably more than the last administration did, to see to it that it will not happen," he said.

Earlier, on NBC, Biden was asked about Cheney's recent complaints that the Obama administration was not treating the fight against terrorists as war.

Biden said the Christmas bomber "was treated the exact way" as Richard Reid, the failed "shoe bomber" who tried to set off explosives on a plane in December 2001. He also noted that the Bush administration prosecuted hundreds of accused terrorists in civilian courts. "Where was (Cheney) the last four years of the last administration?"

Biden added that Obama has said the United States is at war with al Qaeda. "And by the way, we're pursuing that war with a vigor like it's never been seen before. We eliminated 12 of the top 20 people, we have taken out 100 of their associates, we've sent them underground." The success rate "exceeds anything that occurred in the last administration -- and they did their best," Biden added, saying Cheney "either is misinformed or he is misinforming."

On ABC, Cheney said his concern was with Obama's initial response to the Christmas Day terror attempt, "when he went out and said this was the act of an isolated extremist. No, it wasn't. We found out, over time, obviously, and he eventually changed his assessment."

The administration was "slow" to realize "that it was an act of war," said Cheney, adding, "It's the mindset that concerns me."

Cheney said that when the shoe-bomber case took place, it was not long after 9/11, and "we were not yet operational with the military commissions." Though Bush could have held Reid in military custody, "all of that was never worked out, primarily because he pled guilty," Cheney said.

And Cheney said that while more than 300 accused terrorists were tried in civilian courts under the Bush administration, "we didn't all agree with that."

Biden, on NBC, offered a blunt assessment of the previous administration's central foreign policy move -- Iraq. "I don't think the war was worth it," he said. Obama has "built on the positive things that the Bush administration initiated and we have jettisoned those that are negative," he said.

Biden recently said he believes Iraq will prove to be one of Obama's great achievements.

Cheney shot back. "For them to try to take credit for what's happened in Iraq strikes me as a little strange," he said, adding that U.S. withdrawal is "being done in accordance with a timetable that we negotiated with the Iraqis."

"If they're going to take credit, fair enough for what they have done while they're there. But it ought to go with a healthy 'Thank you, George Bush,' up front and a recognition that some of their early recommendations, with respect to prosecuting that war, were just dead wrong."

Cheney had less to say about Obama's handling of another major concern: Iran's nuclear ambitions. Asked whether he trusts the administration to keep Iran from getting nuclear weapons, Cheney responded, "I remain to be persuaded."

The former vice president said he will be seeing former President Bush this month for the first time since the two left office more than a year ago. They have spoken by phone periodically in the interim.

Asked what Bush thinks of Cheney's outspoken criticism of the new administration, Cheney responded, "I don't think he's opposed to it, by any means." And, Cheney added, "I have not been discouraged from doing so."

One of President Obama's top national security advisers, meanwhile, weighed in as well. Speaking to CNN's "State of the Union," Gen. Jim Jones was asked about Cheney's criticism.

"If it's informed, then that's one thing," Jones replied. "But it's important that people understand that we have a sitting vice president who is very much involved in the day-to-day operations of our national security, he is a member of the National Security Council -- has access to all of the information."

Asked whether he considers Cheney to be informed, Jones responded, "I don't know what his information is. I just would ask people to consider the fact that these are very serious issues for our country, and that when we take them on, we take them on in a respectful way. We consult and share with both sides equally of the political spectrum, and we will continue to do that."