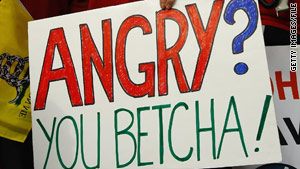 A sign at an anti-health care reform rally in December expresses the feelings of many, a new poll suggests.
STORY HIGHLIGHTS
RELATED TOPICS

Some career politicians are under attack because many think they just don't get it. AC360 asks if they're "Not Republican Enough or Not Conservative Enough," Tuesday at 10 p.m. ET.

Washington (CNN) -- Only a third of U.S. voters think that most members of Congress deserve to be re-elected this year, according to a new national poll. That's the lowest number ever recorded for that question in a CNN survey.

According to the survey, 51 percent feel their own member of Congress should be re-elected -- also an all-time low in CNN polling -- while 44 percent say their representative doesn't deserve to be returned to office in November.

The numbers on both questions are even lower than in 1994, when an anti-incumbent fever helped Republicans win back control of both the House and the Senate from Democrats. The trend line on those questions goes back to 1991, when they were first asked.

"This is not a good year to be an incumbent, regardless of which party you belong to," said CNN polling director Keating Holland. "Voters seem equally angry at both Republicans and Democrats this year."

Fifty-six percent of people questioned in the survey say that most Democrats in Congress do not deserve to be re-elected. An equal percentage say that most congressional Republicans don't deserve re-election.

The poll suggests Americans are split when it comes to their vote this November, with 47 percent of registered voters saying they will support the Republican candidate in their district for the House of Representatives and 45 percent saying they will back the Democrat. Republicans trailed the Democrats by 6 points in November.

The voters' cool view of incumbents of both parties "may hurt the Democrats more because there are more Democratic incumbents," Holland said. "It's a change from 2006, when voters concentrated their anger at GOP members of Congress."

The generic ballot question asked respondents if they would vote for a Democrat or Republican in their congressional district, without naming any specific candidates.

The Democrats currently hold a 255-178 advantage in the House, with two vacant seats that the Democrats once held. Republicans need to win 40 seats to take back control of the chamber.

While President Obama is not up for re-election this November, he will be in 2012, if he decides to run for a second term. According to the poll, 44 percent of registered voters say Obama deserves re-election, with 52 percent saying the president does not deserve a second term in office. The survey also indicates that 49 percent of Americans approve of the job Obama's doing as president, with half of the public disapproving of his job in the White House.

"One problem Obama faces may be the perception that Obama is not a middle-class kind of guy," Holland said. "Only 4 percent of Americans describe themselves as upper class. But a 45 percent plurality say that Obama belongs to the upper class, with 42 percent saying he is from the middle class and 12 percent describing him as working class."

The CNN/Opinion Research Corp. poll was conducted Friday through Monday, with 1,023 adult Americans, including 954 registered voters, questioned by telephone. The survey's sampling error is plus or minus 3 percentage points both for all Americans and for registered voters.