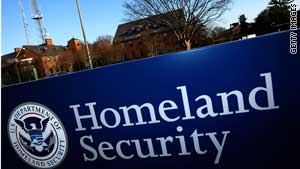 Of the 243 guns lost by Homeland Security agencies, 179 are gone because officers didn't secure them, a report says.
STORY HIGHLIGHTS
RELATED TOPICS

Washington (CNN) -- Nearly 180 Department of Homeland Security weapons were lost -- some falling into the hands of criminals -- after officers left them in restrooms, vehicles and other public places, according to an inspector general report.

The officers, with Customs and Border Patrol and Immigration and Customs Enforcement, "did not always sufficiently safeguard their firearms and, as a result, lost a significant number of firearms" between fiscal year 2006 and fiscal year 2008, the report said.

In all, 243 firearms were lost in both agencies during that period, according to the January report from Inspector General Richard Skinner. Of those, 36 were lost because of circumstances beyond officers' control -- for instance, ICE lost a firearm during an assault on an officer. Another 28 were lost even though officers had stored them in lockboxes or safes.

But 74 percent, or 179 guns, were lost "because officers did not properly secure them," the report said.

Following a review of the draft report in December, Homeland Security took steps to implement its recommendations and overhaul its property management policy, according to a response in the report. A department spokeswoman did not immediately return a call from CNN Thursday seeking comment.

The inspector general cited several examples of "inappropriate practices." A customs officer, for instance, left a firearm in an idling vehicle in the parking lot of a convenience store. The vehicle was stolen while the officer was inside. "A local law enforcement officer later recovered the firearm from a suspected gang member and drug smuggler," the report said.

In addition, an ICE officer left an M-4 rifle and a shotgun unsecured in a closet at his home. Both weapons were stolen in a burglary and later recovered from a felon, according to the report. Another officer left his firearm in the restroom of a fast-food restaurant, and it was gone when he returned.

"Other CBP and ICE officers left firearms in places such as a fast food restaurant parking lot, a bowling alley and a clothing store," the report said.

"Although our review focused on CBP and ICE, other components described similar incidents. For example, a TSA officer left a firearm in a lunch box on the front seat of an unlocked vehicle; the officer realized the firearm was stolen when he returned to the vehicle two days later," said the report. "Officers may have prevented many of these losses had they exercised reasonable care when storing their weapons."

Of the 179 lost because of laxity, 120 were reported stolen and 59 as lost, the report said. That resulted from the agencies' lack of guidance on a standard method for classifying and reporting lost firearms, as well as "a common perception among officers that reporting a stolen firearm was more acceptable than reporting a lost firearm.

"Although CBP and ICE reported 120 firearms as stolen, our analysis showed that these firearms were lost (stolen) because officers left the firearms unsecured," according to the report. "All 179 losses may have been prevented had the officers properly secured their firearms."

The department had about 188,500 weapons in its inventory as of last summer, the report said. The majority are assigned to Customs and Border Protection and ICE officers, but others are carried by agencies including the U.S. Coast Guard, the U.S. Secret Service and the Federal Law Enforcement Training Center.