History has drawn skewed image of the father of 'gerrymandering' (CNN) -- The man known for one of the most partisan practices in American politics had once quit government for a time because of partisanship.

Elbridge Gerry was once an accomplished statesman devoted to his country, but nearly 200 years after his death, his legacy is overshadowed by the tactic that bears his name.

It's called "gerrymandering," and it means redrawing congressional districts, often in odd shapes, for the sake of political gain.

The term was coined after Gerry, as the Massachusetts governor, approved an obscure redistricting plan ahead of the 1812 elections that helped Republicans hold on to power in the legislature.

The plan lumped many of the Federalists into one district, while giving his party, the Democrat-Republicans, the advantage in other districts.

The Federal press ran a political cartoon calling attention to the salamander-like shape of one of the districts, and thus "gerrymander" was born into the political lexicon, according to his bio from the Senate Historical Office.

Gerry's partisan tendencies didn't sit well with his state, and he lost his 1812 re-election bid. While Gerry is best remembered for being the namesake behind the redistricting tactic, there were high points in his political career. 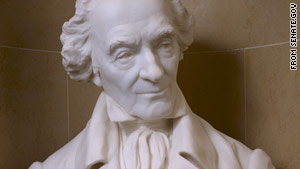 Gerry, whose name is pronounced with a hard "g" unlike the term derived from it, was born in Marblehead, Massachusetts, in 1744. He attended Harvard College and graduated with the class of '62. He returned to Marblehead after graduation and by 1770, he was becoming more active in the anti-British movement, according to his Senate bio.

In 1772, Gerry was elected to the legislature and later served in the Provincial Congress. He was later elected to the first and second Continental Congress, meetings with delegates from the 13 existing colonies. He was a signatory on the Declaration of Independence and the Articles of Confederation.

Gerry argued in support of the "Great Compromise" at the 1787 Constitutional Convention, according to his Senate bio. The Great Compromise yielded the current bicameral legislature with a House of Representatives and Senate.

As the Constitution evolved, however, Gerry feared it would give too much power to what would be the Congress, so he refused to sign it. He viewed it more favorably after the Bill of Rights was added.

In the years that followed, Gerry served in the first and second Congresses as a representative but became disenchanted with the partisan debates and retired after his second term, his Senate bio says.

John Adams later appointed him as an envoy to France, and although Gerry believed he helped to avoid war, he was sharply criticized for his work.

Emerging as Massachusetts' Republican leader, Gerry served as governor twice and was defeated in his bid for a third term, clearing the way for his move to higher office.

With the backing of the Republican caucus, President James Madison chose 67-year-old Gerry, a staunch supporter of the War of 1812, to be his running mate. The pair were elected, but Gerry died 20 months after becoming the nation's fifth vice president.

Gerry was buried in the Congressional Cemetery. His epitaph displays one of his most well-known quotes:

"It is the duty of every man, though he may have but one day to live, to devote that day to the good of his country."