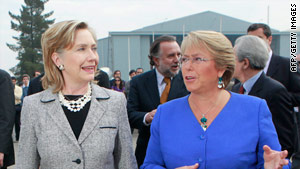 Santiago, Chile (CNN) -- U.S. Secretary of State Hillary Clinton arrived Tuesday morning in Chile, bringing with her more than two dozen satellite phones and a pledge of U.S. commitment to the earthquake-damaged nation.

"The United States is ready to respond to the requests that the government of Chile has made so we can provide not only solidarity but specific supplies that are needed to help you recover from the earthquake," Clinton said at a brief news conference with Chilean President Michelle Bachelet.

"The people of Chile are responding with resilience and strength," Clinton said.

The secretary of state said she brought with her 25 satellite phones, one of which she presented to Bachelet at the news conference. Eight water purification units are on their way to Chile, Clinton said, and the United States will provide a mobile field hospital unit with surgical capabilities.

The secretary of state also said that Americans would be told how they can contribute to the recovery effort.

In addition to meeting with Bachelet at the airport in Santiago, Clinton also met with President-elect Sebastian Piñera, who will be sworn in next week.

"I have been visiting sites of disaster for more than 30 years ... [and] it is very clear to me that Chile is much better prepared, much quicker to respond, more able to do so," Clinton said at a news conference with the president-elect.

She congratulated Piñera, a conservative billionaire businessman, on his inauguration. Piñera extended an invitation to President Obama to visit Chile.

Bachelet leaves office with high approval ratings for having steered the country through the global economic downturn and promoted progressive social reforms.

Clinton is in the midst of a six-nation tour of Latin America, planned before the earthquake.

She attended Monday's inauguration in Uruguay of President Jose Mujica, and then traveled to Buenos Aires, Argentina, to meet with President Cristina Fernandez de Kirchner.

Clinton next travels to Brazil, where she is expected to talk with President Luiz Inacio Lula da Silva about his planned trip to Iran. The United States and other nations believe Iran has undertaken a program to build nuclear weapons, an assertion Iran denies.

She will stop in Costa Rica for meetings with President Oscar Arias and President-elect Laura Chinchilla, who takes office in May. She also will attend Pathways for Prosperity, a meeting of hemispheric officials. The initiative includes such things as "microcredit" loans and ways in which women can be empowered, a State Department spokesman has said.

Clinton's final stop will be Guatemala. She will meet with Guatemalan President Alvaro Colom and leaders of other Central American countries and the Dominican Republic before returning to Washington.

The State Department has "strongly" urged U.S. citizens to avoid tourism and non-essential travel to Chile after the massive earthquake.