Spokesman for US diplomacy apologizes for remark 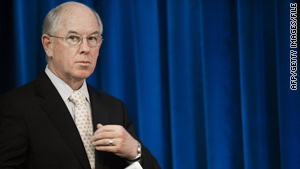 Washington (CNN) -- The State Department spokesman apologized Tuesday for a joking remark he made about Libyan leader Moammar Gadhafi that threatened to turn into a diplomatic incident between the two countries.

P.J. Crowley said he regretted any offense called by his offhand remark, which came in response to a reporter's question about Gadhafi's recent call for a Muslim holy war against Switzerland for its ban on building new mosque minarets.

At a State Department briefing late last month Crowley said the call for "jihad" reminded him of Gadhafi's lengthy speech to the United Nations General Assembly in September.

"I can recall lots of words and lots of papers flying all over the place, not necessarily a lot of sense," he said.

Last week, Libya said it might take action against U.S. business interests in Tripoli in the absence of a formal apology.

"These comments do not reflect U.S. policy and were not intended to offend," Crowley said. "I regret that my comments have become an obstacle to further progress in our bilateral relationship."

Crowley, who had previously said his remarks were not intended as a personal attack against Gadhafi, met with the Libyan ambassador to the United States last week to try and resolve the issue. Jeffrey Feltman, the top U.S. diplomat in the Middle East, will also travel to Tripoli to meet with the Libyan government.

"I told the ambassador, I hope that we can use ongoing dialogue at high levels to continue to advance the U.S.-Libyan relationship," Crowley said.

The feud between Libya and Switzerland stems from a brief 2008 arrest in Geneva of Gadhafi's son, Hannibal, and his wife for allegedly beating some hotel workers. Libya retaliated by detaining two Swiss businessmen.

The diplomatic crisis escalated when Switzerland hit back by imposing travel restrictions on Gadhafi, his family members and his ministers. Libya retaliated by imposing a trade embargo with Switzerland and barring citizens from 25 European countries from visiting the oil-rich country.