Netanyahu: Jerusalem not a settlement but our capital 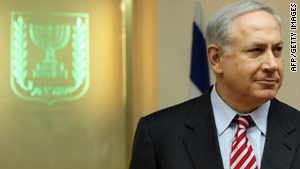 Washington (CNN) -- Israeli Prime Minister Benjamin Netanyahu on Monday sharply defended his government's plan to build new housing on disputed land in East Jerusalem, a decision that has put Israel at odds with its leading ally.

In a defiant speech to the leading pro-Israel lobby in the United States, Netanyahu said Jewish neighborhoods in East Jerusalem are "an integral and inextricable part of modern Jerusalem."

That announcement came during U.S. Vice President Joe Biden's visit to Israel and has strained ties between Netanyahu's government and the Obama administration, which is pushing for new talks to end the decades-old Israeli-Palestinian conflict.

But Netanyahu said his government's policies are in line with those of previous Israeli administrations, and that nearly half of Jerusalem's Jewish population now lives in East Jerusalem, which Israel has occupied since 1967.

"Everyone -- Americans, Europeans, Israelis, certainly Palestinians -- everyone knows that these neighborhoods will be part of Israel in any peace settlement," Netanyahu said. "Therefore, building them in no way precludes the possibility of a two-state solution."

The prime minister met earlier with U.S. Secretary of State Hillary Clinton, who has called the Israel announcement insulting. In her own speech to AIPAC, she said the U.S. commitment to Israel's security was rock-solid but added that as "Israel's friend, it is our responsibility to give credit when it is due and to tell the truth when it is needed."

"Our credibility in this process depends in part on our willingness to praise both sides when they are courageous, and when we don't agree, to say so, and say so unequivocally," Clinton said. "We objected to this announcement because we are committed to Israel and its security, which we believe depends on a comprehensive peace -- because we are determined to keep moving forward along a path that ensures Israel's future as a secure and democratic Jewish state living in peace with its Palestinian and Arab neighbors."

The United States is Israel's leading ally and provides nearly $3 billion a year in aid to the Jewish state, about three-quarters of which goes to purchase U.S. military equipment. AIPAC has called on the Obama administration to step back from its "public demands and unilateral deadlines directed at Israel," but Clinton defended the administration's call for Israel to stop building in largely Arab East Jerusalem.

Netanyahu met with Clinton for close to two hours Monday afternoon, a senior State Department official and an Israeli official said. Most of the session was one-on-one between Clinton and Netanyahu, though Israeli Defense Minister Ehud Barak joined the talks at the end, the officials said.

Netanyahu had dinner with Biden on Monday evening and will meet with President Obama at the White House on Tuesday, the prime minister's office said.

Clinton focused much of her speech to AIPAC on the threat presented by Iran, telling her audience that "Elements in Iran's government have become a menace, both to their own people and in the region."

"The United States is determined to prevent Iran from acquiring nuclear weapons," she vowed. "Our aim is not incremental sanctions, but sanctions that will bite. It is taking time to produce these sanctions, and we believe that time is a worthwhile investment for winning the broadest possible support for our efforts."

And Netanyahu reiterated his government's hard line regarding Iran, which has refused international demands to halt its production of nuclear fuel. He called the threat of an Iranian nuclear weapon a threat not only to Israel, but "a grave threat to the region and to the world."

He received another prolonged ovation when he declared that Israel, which is widely believed to have its own nuclear arsenal, "must always reserve the right to defend itself."


CNN's Jill Dougherty and Elise Labott contributed to this report.