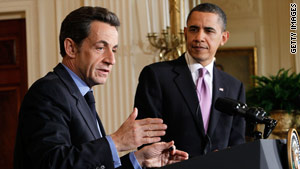 In a joint White House news conference after they met for more than an hour, Obama and Sarkozy agreed that the international community must prevent Iran from developing nuclear weapons.

Obama conceded that the push for stronger sanctions lacked backing from some nations, but he said the effort to persuade the U.N. Security Council to impose additional measures would continue.

"I'm not interested in waiting months for a sanctions regime to be in place," Obama said. "I am interested in seeing that regime in place in weeks. And we are working diligently with our international partners, emphasizing to them, that as Nicolas said, this is not simply an issue of trying to isolate Iran, it has enormous implications for the safety and the security of the entire region."

Obama called the pro-sanctions position "much stronger" now compared to a year ago, after working with France and other allies to engage Iran and offer it an opportunity to work out an acceptable nuclear energy plan.

"We think we can get sanctions," Obama said.

Sarkozy said France fully supported the U.S. position on Iran and also on the war in Afghanistan, where France has troops as part of the NATO forces supporting the U.S. military mission.

"We cannot afford to lose -- not for us, not for ourselves, but for Afghanistan and for the people of Afghanistan, who are entitled to live in freedom," said Sarkozy, who added the task was "arduous" but required courage to carry out the U.S. strategy.

"Defeat would be too high a price for the security of Americans, the French, and Europeans," Sarkozy said. "By fighting in Afghanistan, what we are fighting for is world security, quite simply. "

Sarkozy also praised Obama for being an honest partner on all issues facing the international community.

"His word is his bond, and that is important," Sarkozy said in French, with his comments translated for the media. "No surprises. When he can, he delivers. When he can't, he says so."

Obama offered Sarkozy a warm welcome as leader of what he called the oldest U.S. ally. The talks covered major issues including Middle East peace efforts, the war in Afghanistan, the global recession and the need for coordinated financial regulations to prevent another economic crisis, Obama said.

However, Gibbs said Obama had no plans to ask Sarkozy to deploy more French troops to the NATO forces supporting the U.S. military mission in Afghanistan.

Obama would seek Sarkozy's agreement for stronger U.N. sanctions against Iran, with much of Tuesday's discussion focusing on "what those sanctions look like moving forward," Gibbs said.

"The leadership of both presidents will be tremendously important in the upcoming push for sanctions and additional efforts that are needed" to get Iranians to live up to their responsibilities, Gibbs said, calling Sarkozy "a leader on this."

France is one of the so-called P-5+1 nations, along with the United States, Germany, Russia, China and Great Britain, that have negotiated with Iran over the nuclear issue. The group, which comprises the five permanent members of the U.N. Security Council plus Germany, is divided over whether to strengthen sanctions against Iran, with China and Russia considered the main holdouts.

Obama recently announced an agreement with Russia on a new treaty to reduce the nuclear arsenals of both countries, and U.S. officials say they hope the trust from the agreement signals greater openness by Russia to tougher sanctions against Iran.

After their talks, the two leaders were to join their wives for a private dinner at the White House, accompanied only by interpreters, Gibbs said.

Sarkozy's wife, Carla, a former fashion model, visited a local school for disadvantaged students Tuesday where she read to one class and elicited giggles when she kissed the cheek of a youngster who gave her a T-shirt bearing the saying, "Assign Yourself."

Noting the French reputation for fine cuisine, Obama teased Sarkozy by telling reporters that "the fact that Nicolas went to Ben's Chili Bowl for lunch shows his discriminating palate."

Sarkozy quickly noted that Obama had recommended the diner, and that the interior there included a large photo of the president.

CNN's Alan Silverleib and Dick Uliano contributed to this story.