What programs did Congress leave unfunded? 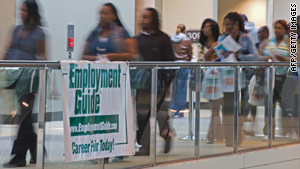 (CNN) -- The Senate left town for its spring recess without taking up a bill that would patch funding for unemployment benefits and other programs.

Lawmakers plan to take up the Continuing Extension Act of 2010 when they return later this month, but until then, several programs will be left in the dark.

Here are some of the programs affected:

Key Democrats said they hope to pass a retroactive extension, compensating the unemployed for a gap in funding, after they return from recess the week of April 12. If approved, it would be the seventh time the deadline has been extended since June 2008.

Cut in Medicare payments to doctors

Starting April 1, doctors are slated to be hit with a 21 percent reimbursement cut to payments they receive for Medicare services. The legislation would have extended a freeze on the reduction for another month.

The "doc-fix," which would have permanently increased Medicare reimbursement rates for doctors, did not make the final version of the recently passed health care reform legislation. It would have cost more than $200 billion over 10 years.

The Centers for Medicare & Medicaid Services asked its contractors to hold claims for some services for 10 days, allowing Congress more time to take up the legislation.

The CMS expects a minimum impact on doctors since claims are not paid for at least two weeks after being received.

The bill extends the use of 2009 poverty guidelines for federal programs through April 30, therefore preventing having to lower the poverty line, according to the House Committee on Ways and Means. This would prevent some people from being excluded from programs including Medicaid and the Supplemental Nutrition Assistance Program.