Commentary: China in balancing act between Iran and U.S. 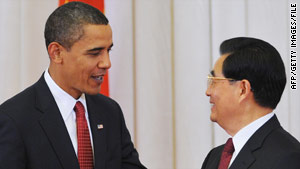 (CNN) -- If U.S. officials are correct, China could be poised to lend crucial support to White House efforts to curb Iran's nuclear ambitions.

On Wednesday, U.S. ambassador to the United Nations Susan Rice said China had "agreed to sit down and begin serious negotiations in New York" over possible new sanctions against Iran. But can Beijing afford to alienate Tehran?

The U.S. has been pressing China to support a new U.N. Security Council resolution that would impose tougher sanctions. China, which wields veto power on the Security Council, has been hesitant. It's the last holdout in the way of passing new sanctions that U.S. President Barack Obama says he wants to put in place within weeks. If China actually signs on, it could be a startling game-changer.

The key word is "could." Linda Jakobson, Global Security Analyst at the think tank Stockholm International Peace Research Institute (SIPRI) China, said: "I don't think China is going to easily, or in any short time, agree to sanctions. It goes against the grain of China's foreign policy."

China's position has always been to use diplomacy and dialogue, not sanctions, to resolve the standoff.

"It does not fundamentally believe that sanctions on Iran are going to work," Stephanie Kleine-Ahlbrandt, China adviser of the International Crisis Group explained. "It thinks sanctions will actually backfire by inducing resistance instead of compliance."

China has other reasons to hesitate. "Iran is China's third-largest oil supplier and home to expanding energy and commercial enterprises," said Kleine-Ahlbrandt.

"More broadly, China and Iran share a strong resentment of perceived Western imperialistic behavior, both historically and currently, through perceived American meddling in their domestic politics. Beijing has a strong bond with Tehran that it considers helps counter-balance American influence and interests in the region, which China considers part of its grand periphery."

Beijing, so far, has downplayed the U.S. reports. Publicly, it has merely repeated its usual stance.

"We oppose Iran's possession of nuclear weapons," said Foreign Ministry spokesman Qin Gang. "At the same time, we also believe that as a sovereign state, it has the right to peacefully use nuclear technology. We hope all sides can resolve this through diplomatic negotiations."

Meanwhile, some believe China may be trying to maximize its gains by being the man in the middle.

Iran's top nuclear negotiator Saeed Jalili is lobbying China's leaders. At the end of his talks in Beijing this week, Jalili said the main objective of his visit was to appeal to China to reject additional sanctions on Iran, maintaining that his country's nuclear program is for peaceful purposes.

"We've told China to see to it that the superpower countries abandon their mistaken approach," he told a news conference. "The Chinese said they would continue to negotiate and apply pressure."

"It's the glue that cements relationships between Iran and China," said Jakobson. "China needs Iran because of its energy. Iran needs China for a number of reasons. But of course the nuclear issue will come up. I'm sure China will continue to persistently try and persuade Iran to comply with the IAEA [International Atomic Energy Agency] and open up their facility for inspection."

President Obama has used phone diplomacy to court China's support. While on board Air Force One touring the northeastern United States, he held a one-hour phone conversation with Chinese President Hu Jintao.

In a statement, the White House also welcomed Hu's decision to attend a Nuclear Security Summit in Washington in mid-April, calling it an "important opportunity" for both countries to address their shared interest in "stopping nuclear proliferation and protecting against nuclear terrorism."

The phone conversation seems to signal an improvement in U.S.-China relations.

In recent months, the two global powers have clashed over U.S. weapons sales to Taiwan, Obama's meeting with the exiled Tibetan spiritual leader, the Dalai Lama, and Beijing's Internet censorship.

They have also clashed over trade disputes, with Washington pressuring Beijing to revalue its yuan currency, which U.S. politicians say is being kept artificially low to give China's export industry an unfair advantage.

The changing tone of Sino-U.S. relations may indicate that China will put more of a premium on its ties with the United States than with Iran, analysts said.

Analysts said, on the issue of tougher sanctions, China will likely drag its feet, weaken the language of a U.N. resolution but refrain from wielding its veto power. "I think China is very serious about non-proliferation," said SIPRI's Jakobson.

"China does not want to see Iran become a nuclear weapon state, but on the other hand, China is dead against the use of sanctions and wants to see this whole thing resolved through diplomatic means. China does recognize the importance of the United States to its own well being, the interdependence between the U.S. and China. China wants to be seen as responsible and cooperative in the international arena."

And China does not want to be the odd man out.