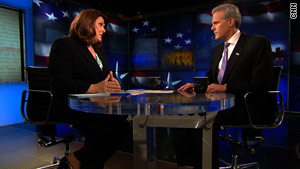 Washington (CNN) -- Dancing on the head of a pin, two of the president's top advisers were out Sunday touting March job gains as signs that the president's economic policy is working while paying due diligence to a brutal 9.7 percent unemployment rate.

"We've got a long way to go," according to Larry Summers, director of the National Economic Council.

Christina Romer, chair of the Council of Economic Advisers added, "We still face a lot of headwinds."

Both were primed with talking points, including a slam on Republicans for refusing to extend unemployment benefits until Congress found some way to pay for it.

Economy better, but still 'a long way to go'

"That's not how government should be working," Summers scolded.

"Absolutely has to get done," Romer insisted.

China and its currency

If so, China's manipulation of its currency is the latter. The administration decision to delay its world currencies report (due mid-April) until after a series of meetings with the Chinese was quite the touchy issue this Sunday.

Pressed repeatedly on whether they agree, neither Romer nor Summers would play. The default position was basically, we¹re looking at it.

"This is absolutely going to be an issue that is high on the agenda," said Romer.

Summers promised the U.S. would pursue the issue with "a great deal of vigor." He denied on ABC that the delay was tied to the U.S. hope that China will go along with sanctions against Iran. Wonder whether all that U.S. debt China is holding has anything to do with the delicate approach?

How are U.S.-Israeli relations? "Great." Privately, U.S. officials have a different description.

Supreme Court Justice John Paul Stevens' declaration that he will leave the high court before the president's term is up sent senators who would confirm his replacement out of the starting gate.

Former Republican now Democratic Sen. Arlen Specter of Pennsylvania told Fox News he hopes the justice, on the verge of his 90th birthday, will not retire this year. He worries about a filibuster tying up the Senate in an election year.

On the same show, Sen. John Kyl, R-Arizona, promised if the president sends up the right nominee, defined by Kyl as not "overly ideological," then he does not believe Republicans will filibuster.

A prediction and a pitch